Although this was my first ever British Airways flight, I’d read enough online reviews to have suitably low expectations. This flight met my expectations! It was embarrassingly bad!

The nightmare we had even getting on this flight will be covered in a separate blog, but sorting out the mess meant that we got to the gate shortly before boarding was meant to start. This, in itself, was annoying as we didn’t get chance to use our Priority Pass to experience the lounge or restaurants at Lima Airport.

Although we were at the gate in time for boarding, the crew rocked up an hour late after getting stuck in traffic. Lima traffic is horrendous so we set off earlier than planned to account for it. Maximum working hours, apparently, dictates that BA crew should just be late. They eventually arrived at 2155, the time the flight was meant to depart and we finally took off at 2250, 55 minutes late.

The first thing I noticed as I sat down was the pathetic, tiny TV screen, smaller than anything I’ve seen in economy since started flying long haul in 2002! I look forward to watching a few films during a long flight, but that wasn’t going to happen on this flight. I don’t have very big hands so you get the idea!

I couldn’t get the menu options to disappear from the right side of the screen. A crew member reset the system but on reboot, the menu options were still there. A second crew member came and gave my remote control a vigorous rub and that seemed to do the trick! Apparently, the remotes get gunked up and the buttons stick down. Nice!

Not that he should have bothered sorting the remote, as the screen was so small and such bad quality that it was impossible to watch anything on it. I watched half of the sequel to Fantastic Beasts but turned it off halfway through as I couldn’t see what was happening! Whilst giving the remote a good rub down, the crew member moaned about the “dated” aircraft making their jobs harder. I said “dated” was being polite! The guy was probably in junior school when this aircraft went into service! That damn handset went on to do my head in for most the flight, half sticking out of its holder!

A lot of other people were having issues with their TV screens and one of the passengers in front of me got moved in Business Class because his screen didn’t work. The passenger next to me just watched his iPad and the lady across the aisle did her puzzles. You’d think I would have learnt to be more prepared after a really dull flight to Miami when the TV systems broke and I had to stare at a blank screen for 9 hours!

There’s a noticeable lack of niceties in BA’s Premium Economy, unlike Virgin’s where

you genuinely feel like you’re getting a premium experience over economy. There’s only water or (cheap, concentrate) orange juice for a welcome drink. Where’s the fizz? The drink service at least started quicker than Iberia and we were given a bottle of wine for dinner at the same time. I liked that there was a choice of 2 whites and 2 reds. The pesto breadsticks handed out were tasty but I bet mum didn’t like them!

Dinner was served almost exactly an hour after take-off, so at least we weren’t kept waiting. The salad was very oniony despite no mention of onion on the menu. I don’t like onion.

With a choice of fish, beef or pasta, I knew the other half wouldn’t be happy with the selection so I went for the fish to give him a better chance of getting a meal! The trout and vegetables were surprisingly good, the sauce had a lovely ginger taste and it was all piping hot. I’m a weirdo and eat each element of a meal separately and all of it was tasty! I noticed that the teacup was plastic although everything else proper china and glassware. 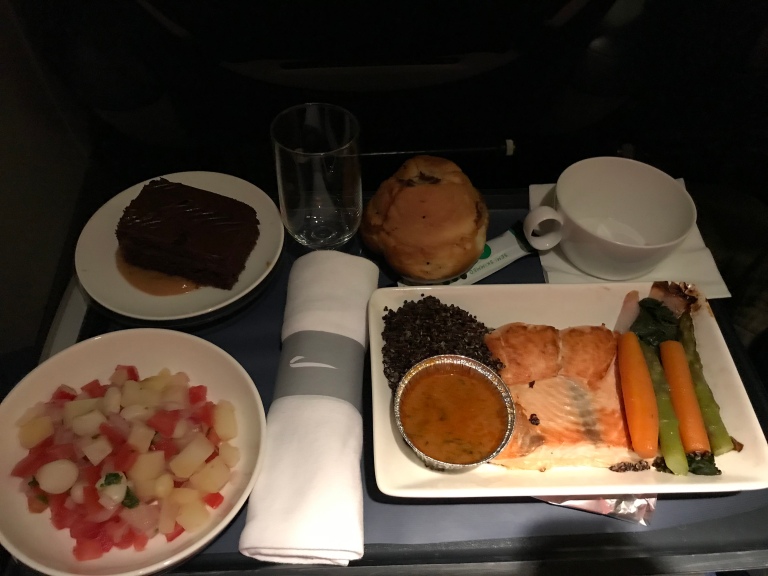 What bread buns do they serve on BA?! It was incredible, some of the best bread I’ve ever tasted! Light and fluffy, warm and delicious with melty butter. Who knew I’d be so impressed by a bread roll?!

The chocolate cake was ok, a bit dry around the edges but the caramel sauce was tasty and added some moisture. I don’t know why airlines serve cake; I’ve never had a cake that wasn’t dry on a flight. I completely misjudged the amount of sauce though and could easily have used more for earlier bites!

One of the things that annoys me about BA is that they insist on charging to select a seat, even in premium cabins. What is even more annoying is that they have an automated system which only allows you to select certain seats and as BA thought I was travelling on my own (I was on a separate booking to mum & the other half), I was only given the option of selecting 1 seat – 13A. And BA wanted €65.00 for me to reserve it! Why would I pay to select a seat that I don’t even want? I obviously didn’t pay and ended up being squashed in 13A anyway, next to someone I didn’t know. I always dread sitting next to strangers as you never know what you’re going to get; rude, obnoxious or worse; smelly. In the end, this guy was fine but being in a window seat is rubbish for someone who pees once an hour!

As I couldn’t watch any TV and didn’t want to keep disturbing my new best mate to go for a wee, and with about 10 hours of flight still ahead of me, I thought I might as well try and sleep. I’m not very good at sleeping sat up, but the seat had a decent amount of recline and was surprisingly comfy. The fabric was atrocious, something from 1995, but it was comfy and I managed a (fitful) 7 hours rest. That’s not bad for me! I actually think it’s easier to sleep on really long flights as you know you’ve got nowhere else to go for a really long time. I slept pretty well on the flight home from Japan, but that’s because I was hammered!

One thing I did like about the seat was the 3 pockets to store stuff. A lot of airline seats suffer a lack of storage so this was pretty handy. The box where my left foot wanted to go got annoying though!

After a bit of rest, it was time for breakfast which was alright. I’d read reports of BA serving juice and a cereal bar for breakfast in Premium Economy and was dreading something like that, but it was a proper airline breakfast. I liked the omelette; it was nice and cheesy! The bacon was fatty but I quite like fatty bacon and the vanilla yogurt drink was good. The Chelsea bun was a bit dry (why airlines, why?). The tea was served in a paper cup but to be fair, the crew did explain that the china is so cup cold that’d it’d freeze the tea in seconds, which makes sense. It was odd that there wasn’t an egg free breakfast option which annoyed the other half as he doesn’t like eggs (except in cakes, obvs!). The crew said they’d check if there was anything left in Business Class that he could have but the greedy buggers had eaten it all so he only had the yoghurt and the bun!

As we landed at 1700, Gatwick Airport was fairly quiet for arrivals and the bags came off really quickly which was good. I didn’t want to rush trying to get back north so I’d booked us in to the Premier Inn at the North Terminal, which I was really glad about after such a long flight. A couple I’d spoken to were heading back to Huddersfield in a taxi and I couldn’t have imagined anything worse! Yes, it’s nice to get home, but a nice meal, hot shower and an early night was exactly what I needed after the trauma of the past few days and a 12-hour flight!