As you might have read in my Top 10 Travel Moments, during Qatar Airway’s Travel Festival in January 2017, they were selling a limited number of business class seats to Tokyo for just €600.00 (£560.00) each. I managed to bag 3 of them and this is a review of our onboard experience.

The “Sake Fares” (as they were lovingly named on Flyer Talk) were only available from Amsterdam or Brussels, so we ended up starting our trip from Amsterdam. That wasn’t a major deal, me and the other half flew out a day early and spent the day wondering around Amsterdam. My brother flew in after finishing his nightshift and met us in time for dinner. It is quite common to find business class flights much cheaper from European airports than it is from UK airports, but whenever booking an ex-EU flight, always allow enough time to make your connection; a minimum of 4/5 hours but ideally overnight. Considering we’d waited 10 months for this trip, its fair to say that we were all pretty excited!

Unfortunately for me, I picked up a stomach bug and from about 4am on the morning of the flight, I started to get very well acquainted with the toilet bowl in the Amsterdam hotel room. One of the worst instances of sickness I’ve ever had (worse than Sorrento!), I really wasn’t looking forward to spending the best part of 2 days travelling to the other side of the world.

The other half and my brother had some breakfast at the hotel whilst I showered and attempted to make myself look normal. The taxi picked us up at 11am and, armed with plastic bags in case of an accident, we set off for Schiphol Airport. After another visit to

the toilet, we made our way to check-in and I had a breakdown on the escalator; I felt so unwell, I wasn’t sure I could travel and with tears streaming down my face, I had to take a few moments to pull myself together. I honestly thought I’d get pulled aside to be searched at security, all pale and sweaty, I couldn’t have looked dodgier! But, we were through quickly enough and made our way to the Aspire Lounge which Qatar uses for its business class passengers.

I would have liked to have sampled everything that the lounge had to offer. My brother certainly enjoyed the gin, but all I could manage was a few sips of water and diluted apple juice. The toilets were very nice though and I was glad that they were clean as I wretched over the bowl.

The flight to Doha was pleasant enough, although I slept for most of it. As soon as we’d taken off, I took advantage of the fully flat bed and went to sleep. I made the boys promise to document their meals so that I’d have at least something to write about!

My brother had a biryani which was massive! It took a few attempts to finish it and he was still eating it when I woke from my nap. The other half wasn’t overly keen on the feta and butternut squash salad or raw tuna appetiser, but practically made love to the chocolate torte. It did look nice! I think my brother would have preferred a few more gin and tonics! 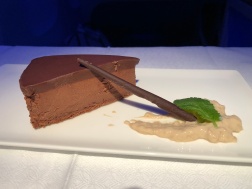 I must say that Karin, the Cabin Service Director really made an effort to make sure I was comfortable and as soon as I woke up she asked if I needed anything. The fruit platter was just perfect, deliciously hydrating and easy on my stomach. 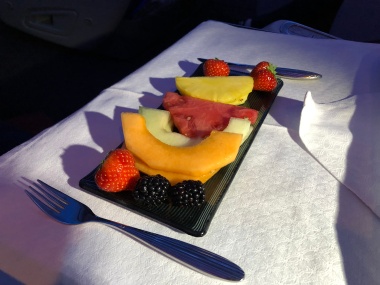 One of the major downsides of the “Sake Fare” was a very long wait in Doha on the outbound journey. After being ill, I really wasn’t looking forward to the 7hr 10m wait. Especially as, with the expected flying time, we were looking at nearly 8 hours to kill. In the end, we were in the Al Mourjan lounge at midnight and with boarding starting at 0600, we had about 5 hours to wait.

The time actually went pretty quick as we manged to snaffle 3 of the sleeping pods, which are pretty cool even if it is like sleeping in a shopping centre. There’s a baggage room to lock up your belongings so you don’t need to worry about keeping an eye on your stuff whilst you try to rest. I slept for a good 3 hours, although the boys didn’t manage quite as long as me. After waking, I took myself off to the cafe and managed a smoked salmon sandwich before a slow walk to gate. The lounge was really quiet and I was the only person in the café, which was a bit weird! As we made our way to board fight number 2, I was disappointed not to get the posh transfer bus to the plane! 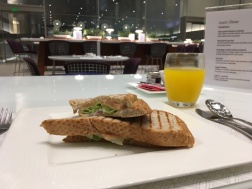 The flight from Amsterdam to Doha was operated on a Boeing 777-300 which we’d flown on from Phuket to Doha earlier in the year. The Doha to Tokyo Haneda flight was on an Airbus A350-900, which I was looking forward to flying on for the first time.

Whilst the first thing you notice is the difference in space between the two aircraft, the A350 is super quiet in direct comparison to 777. There’s hardly any engine noise in the cabin. The A350 has the same style seat as the 787 & A380 which isn’t as wide as the 777 seat, but it is a lot more private. The 777 seats will eventually be replaced by the fantastic Qsuite but that transition will likely take some time.

Similar to the 787, the A350 also has lots of headroom gained from the removal of luggage bins from the centre of the aircraft, although even I managed to smack my head on one with the door open! What I do like about the seat on the A350/787/A380 is that everything is within arm’s reach and you get a little drawer to store your shoes. The seats on the 777 are so big that I have to actually get out of my seat to reach the storage under the seat in front. Yes, I really am that lazy.

Breakfast of more fruit, followed by Greek yoghurt with berry compote and granola was served shortly after take-off. I really do like Qatar’s Dine on Demand approach which really helps your body adjust to travelling across multiple time zones and gives you the choice of when to eat. If you want to sleep or work, you can fit the meal around your schedule. It must also make it easier for the crew too, as they’re not rushing to serve the whole cabin at the same time. Before our trip, my brother asked me what I enjoy most about flying business class and I said it was the meal service. Especially with Qatar Airways, there’s a sense of ceremony around meal times and the crew work hard to make you feel special and looked after. Even if what’s on the menu isn’t exactly to your taste, there’s still choice and effort put in to presentation.

A few hours before landing, I was starting to get my appetite back so decided to try the Japanese meal. The beef was delicious, very tender and just melted in the mouth but the octopus was very chewy and not at all what I stomach was wanting! The tofu was good although the fishy flavour was a bit much for my delicate stomach so had to leave most of it. The sake definitely hit the spot and I fell asleep for about 40 minutes and didn’t even realise until I woke up! I had to rewind the movie I was watching! An old Japanese guy really hit the sake hard; I saw him staggering about everywhere at immigration!

The selection of movies isn’t as good with Qatar Airways as it is on Virgin Atlantic or Emirates, but they do have a decent selection and enough to pass the hours. The highlight on this trip though, was the view over the Himalayas, which was incredible in clear blue sky. I couldn’t tell which mountain was Everest or K2 but the whole area looked absolutely stunning. When you’re flying at 11,000 meters and the tops of mountains are at 8000 meters, you get a real sense of scale! I’d read about the great view on Flyer Talk so made sure to get us all window seats on the left side of the aircraft and I’m so glad I did. The views were spectacular. What was also pretty cool, was the cabin being brightly lit by a meteor flying to earth as we were approaching Tokyo. Me and the other half saw the flash but didn’t realise what it was until we saw the news!

The return trip involved my longest ever single flight; 12 hours 20 minutes from Tokyo Narita to Doha. We arrived at Narita 4 hours before departure, having travelled up from Kyoto on the Shinkansen. Narita is a pretty decent airport with lots of shopping and places to eat before and after security.

Qatar Airways use the Sakura Lounge at Narita which was very nice, probably the second-best lounge I’ve used after Qatar’s own Al Mourjan lounge in Doha. There’s plenty of seating space with self-service bars dotted around. The free Wi-Fi is probably the best in Japan! The restaurant serving a hot buffet is on its own floor, up a very grand and sweeping staircase. There’s beds to catch 40 winks – and I mean actual beds too, not just a chaise lounge. In addition to the beds, there’s massage chairs and showers. Considering I was so ill on the way out, I made sure to take full advantage of the facilities this time around! 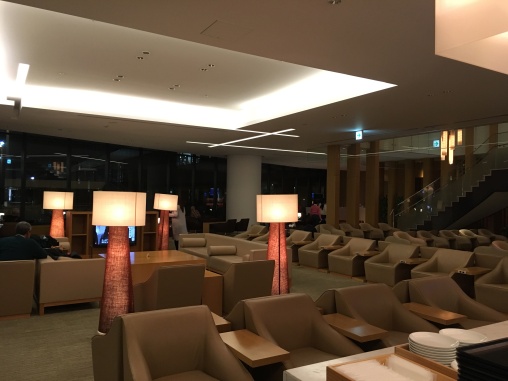 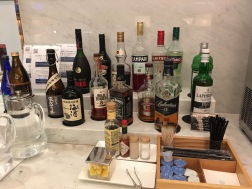 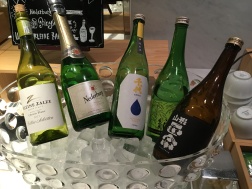 After having a Raman soup for dinner, the drinks made me a little tipsy and after a rushed last-minute spending spree to burn the last of my Yen, we boarded and the flight left 20 minutes early. Cracking on with rose champagne, I ordered my last Japanese meal, which was better than the one I’d had on the outbound; less fish stuff. Even after 10 days in Japan, I still had issues with chop sticks! 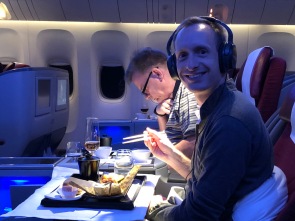 The champagne helped in getting nearly 7 hours of sleep, despite watching a horror movie (the remake of Stephen King’s IT) which would usually keep me awake for days! For breakfast, I had an orange granola compote with peach and apple cinnamon crepe. The crepe was all kinds of ridiculous deliciousness. 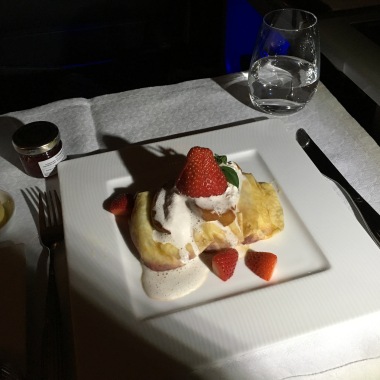 The layover on the return journey was a more respectable 2 hours so by the time we’d cleared security, had a few drinks in the lounge and been to the loo, it was time to board the last flight. I, of course, couldn’t say no to the rose champagne, despite it being 0700 in the morning!

Because of the time of day, the menu was a little strange. I’d had breakfast on the last flight, so didn’t want another breakfast. Wanting something brunchy, I chose the smoked turkey and pastrami salad followed by really creamy scrambled eggs with beef and potatoes. The other half went with the cheese board. 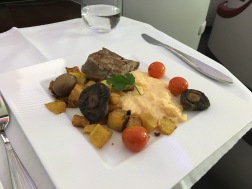 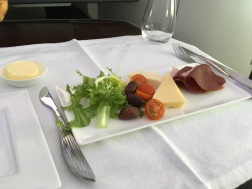 The beef was delicious if a little chewy and I thought the eggs were a bit too runny when the plate came out, but they actually very tasty. I eased off the champagne and moved on to tea with blueberry muffin and croissant, I suppose the holiday must come to an end at some point.