Everyone knows that I’m a travel geek with planes and trains my absolute favourite modes of transport, so when the opportunity to take a holiday by rail came up, I jumped at the chance!

Our journey started with an LNER Azuma train from Leeds to London and I was looking forward to trying out First Class on the newest trains on the East Coast Mainline in about 30 years! I’d actually sampled Standard Class on the Azuma just a few days before and was really disappointed with the quality of the seat. Someone on Twitter called them ironing boards and that’s about right! The seat backs are bolt upright and rock solid with no padding or attempt to make them comfortable. Considering that these are long distance trains, the designers really got this wrong, in my opinion. I did, however, like the extending tray table and the red, amber, green indicators for whether the seat is reserved, reserved for part of the journey or not reserved. 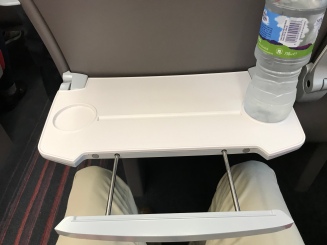 We arrived at the LNER First Class lounge at Leeds station only about 30 minutes before our train so we didn’t have long to enjoy it, but I was impressed by it nonetheless. I liked the Leeds inspired decor, the mix of low seating and workbenches with charging points and tables for 2. There’s a really decent selection of food and drink items and the Wensleydale creamery rhubarb and vanilla yoghurt was delicious! There’s a self service coffee machine with Yorkshire tea, of course. Cakes, biscuits and breakfast pastries were also on offer. In a mini-fridge, there were cans of coke and bottled water. 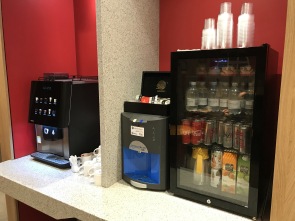 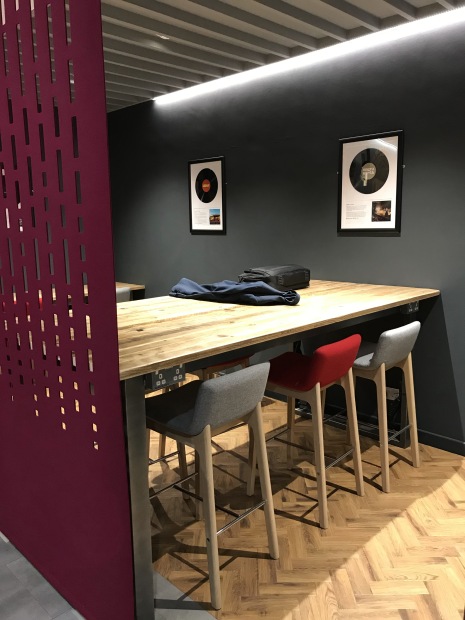 Once we boarded the train, newspapers were handed out before we even left Leeds, with the first drinks service within 10 minutes of departure. I elected for a very light and refreshing rose-even if it was 1100! I’m on holiday after all!

The seats in First Class are definitely more comfortable than Standard – they actually have some padding – but they’re still not great for 2+ hours of travel. The deep burgundy colour of the fabric already looks old fashioned and probably won’t age well. I also don’t understand the design of the sink in the toilet which fires water from a great height in to a very shallow bowl, soaking you and the entire unit in the process!

There wasn’t a menu for lunch on our table but the crew came around and offered beef or salmon sandwiches, chicken casserole or ricotta filled cannelloni. I ordered the chicken and the other half asked for the pasta. We were left with some Corkey’s ready salted crisps whilst waited for the main to be cooked (well, heated up). There was a tea & coffee service before lunch which I thought was a bit odd. Nonetheless, the chicken casserole was lovely, served with vegetables and skin on mash and it was just about hot enough. The cannelloni was a decent size and stuffed full of cheese. They came around with another drinks service so I had another cheeky glass of rose.

Our overnight hotel in London was about an 8 minutes walk from Kings Cross and St Pancras so ideal for our early Eurostar the next morning. We arrived a bit before check-in opened but the room was ready so we were allowed to check in. The hotel had given us a complimentary upgrade and a bottle of wine for being a hotels.com silver member, which was a nice touch. The apartment was small but clean and pleasant, a bargain for the price. The bed though, was far too soft and I was awake from 0330, not what I needed with 12 hours of train travel ahead of me.

We arrived at St Pancras just before 0700, for our 0855 Eurostar to Lille. We met with the Tour Manager who would escort us to the boat in the southern French port city of Sete and then headed for security, which took about 30 minutes to clear. We had to pass through passport check by both British and French border forces.

Our American Express Platinum card gets us lounge access with Eurostar which is a really great perk of the card as you can normally only get access if travelling Business Premier Class or have elite status in Eurostar’s loyalty scheme. Just like an airport lounge, the space is an oasis of quiet away from the hubbub of the main concourse. Although the lounge was fairly busy, it was quieter upstairs and we didn’t struggle to find a seat. After a lovely coffee and delicious almond croissant (it was huge!) we headed off to meet the train. I was disappointed not to have tried one of the smoothies from the sunken bar! I also though that the lounge is showing it’s age in places, with the leather seats worn and looking a bit scratty. Still, it’s better than main concourse! 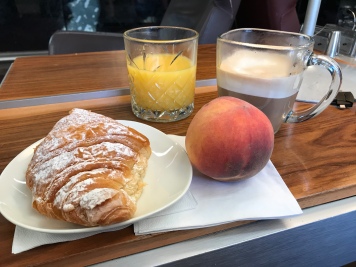 This was the other half’s first time on Eurostar so we upgraded to Standard Premier Class to make it a bit more special. There’s less seats per carriage than in Standard Class with more seats for 2. Each seat has a table and we managed to get a Club Duo which was a table for 2. You also get a meal included in Standard Premier and as it was early, we had a continental breakfast served as we were going through the channel tunnel. As much as I love flying, eating your breakfast at the bottom of the sea is pretty cool!

The journey to Lille was just 90 minutes from London and as we had some time to kill before our next train, we nipped to the Westfield shopping centre directly opposite the station for a wander around and a little lunch. We grabbed a table at a Paul restaurant and watched as they made fresh bread through the window in to the kitchen. The food was very good and I was creased laughing when the other half said thank you in Spanish rather than French!

Back at Lille Station, the TGV train arrived about 20 minutes before departure so we were able to board and take our seats. I was really impressed by the size and comfort of the seats which even have electric recline. The seats are very padded and comfortable. After such a bad nights sleep the night before, it was exactly what I needed for the 3 hour journey to Lyon. I even loved the little personal bin under the seat! As you would expect in First Class, each seat has a charging point and the tables are plenty big enough for a 2 laptops. Whilst I did nap quite a lot during the journey, I loved seeing the French countryside whiz past the windows and you really get a sense of speed on these trains!

The TGV from Lyon to Avignon was not as fast, but it was a duplex which meant we could get seats on the upper deck. I thought this was really novel as we don’t have double decker trains in the UK. The seats weren’t as comfortable as the high speed train but they were still spacious, and the scenery was just as spectacular as we swapped endless fields for snow capped mountains. A journey of just over 1000km in less than 7 hours is pretty incredible! 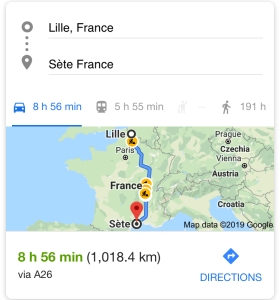 After spending the week in the South of France, we caught the TGV from Nimes to Paris where a coach transfer took us from Gare de Lyon station to Gare du Nord, where the Eurostar terminal is. Wanting to make the most of our Amex lounge access, me and the other half headed straight to the lounge for some pre-departure drinks and nibbles.

The Paris lounge is oh so much nicer than London, having being renovated in 2017. The style of a Parisian apartment, flooded with light with sofas and socialising space as well as private booths down the righthand side, there are definitely worse places to wait for your train! 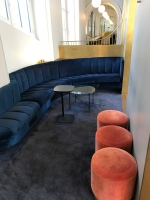 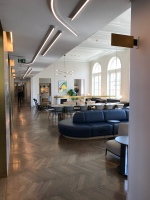 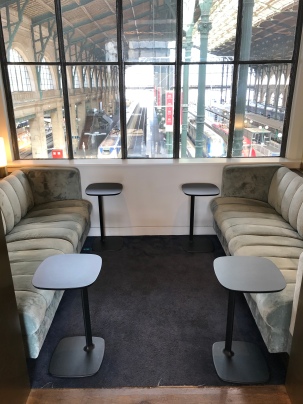 As we were there around 1400, the cocktail bar wasn’t open but there is a self service bar with premium spirits as well as Eurostar’s very own brand of gin. There’s also a fridge with beer, cidre, fruit juices and soft drinks. The soft drinks being full size too, which I thought was impressive. 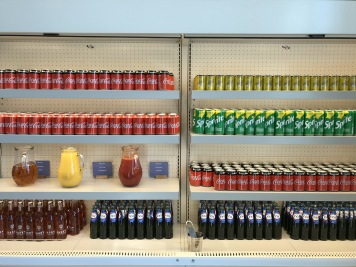 There isn’t food in the lounge but there is a selection of olives, nuts and nibbles to go with your gin and tonic. Most people seemed to being food in from the cafes in the main station which didn’t appear to be a problem.

About 20 minutes before departure, we set off to board the train and again had Club Duo seats in Standard Premier Class. The train set was an older E320 than what we had on the outbound and you could definitely tell. It wasn’t half as nice. Nonetheless, the journey was comfortable enough and were served a Moroccan chicken lunch with a crisp white wine on the side. The dessert of a sponge cake with strawberry jam on the top was only ok. The tea, however, was strong and just to my liking! Shame about the tiny cups which give you about 3 mouthfuls of drink!

We arrived in to London St Pancras about 15 minutes late so had to walk briskly to Kings Cross for our direct train home, another LNER Azuma! The seats seemed even harder than before but that’s probably because I’d been sat on trains for about 6 hours by now!

The crew were warmer than on the way to London and drinks were quickly served – another glass of the tasty rose for me! I ordered the chicken supreme for dinner which was served with green beans and new potatoes and the other half had a pork and cider dish served with rice. Both meals were just about hot enough and nicely finished off with a mango and passionfruit cake. All in all, not too shabby.

Date of trip: September 2019 (late posting due to an error on WordPress)

Price paid: this trip was provided by Great Rail Journeys

2 thoughts on “Getting my rail geek on!”