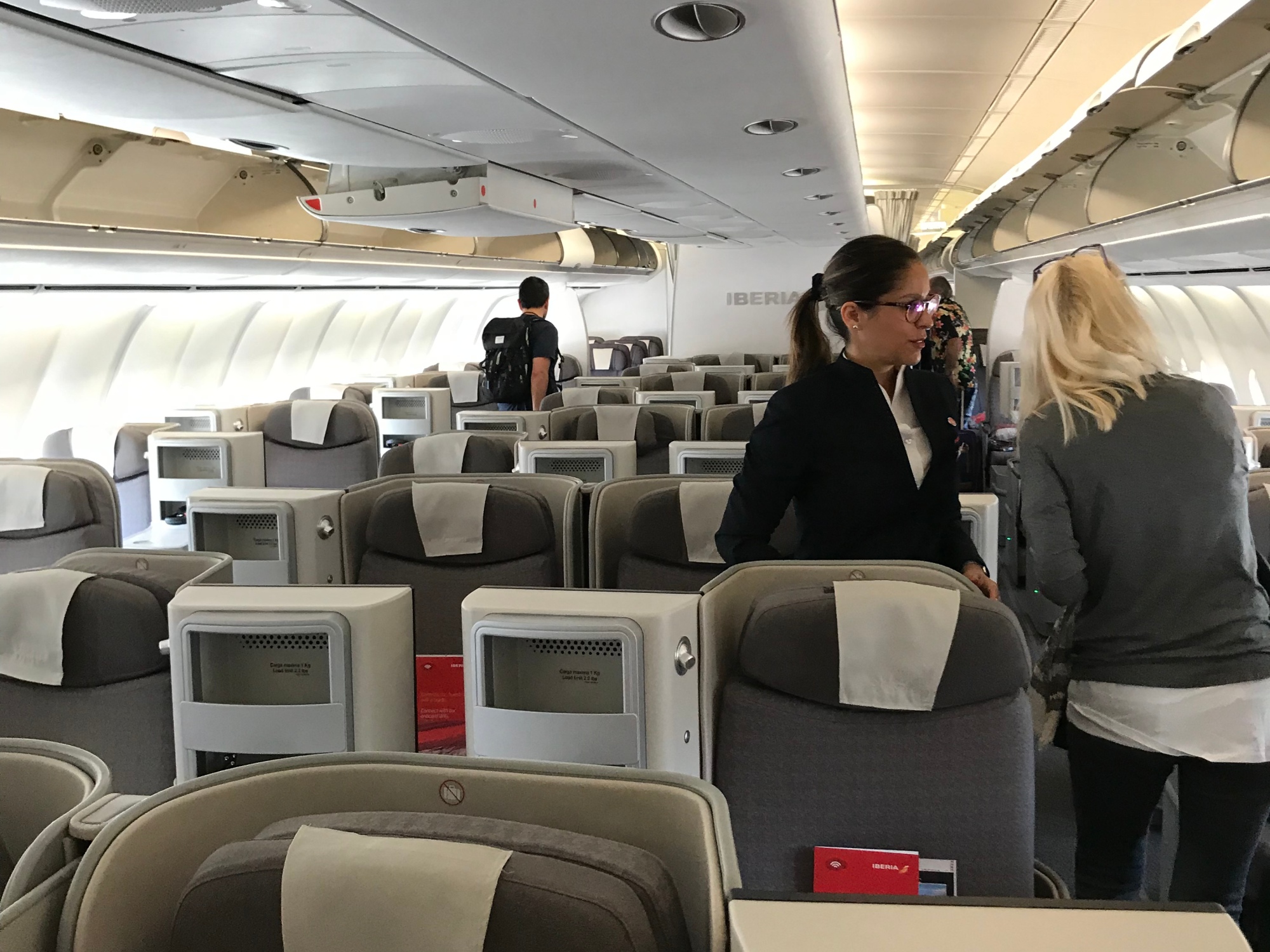 After the saga of booking this holiday, I wasn’t sure that I was even excited about it! This has been a stressful and complex trip to put together, but the day had arrived and I might as well enjoy it!

After taking the train from home to Manchester Airport (which in itself was a farce due to engineering works) it took an hour to get from the train to the Escape Lounge in Terminal 1. I must say though, that security staff at Manchester must have been on some kind of course because they were actually nice, and that never happens!

The lounge was busy but we got seated at the bar. Terminal 1 is primarily used for low cost and leisure airlines and you could tell that by the clientele in the lounge! We used our Priority Pass which comes with our Platinum American Express so we didn’t have to pay to use the lounge.

As it was lunch time, I had a hot pasta with Bolognese sauce, there was also a mushroom

and ham & mushroom, carbonara and Aribiata sauce. There was some delicious rosemary focaccia and a selection of salad. The lounge has a great runway view with planes landing every few minutes.

The flight to Madrid was about 30 minutes late departing but otherwise uneventful. The Spice Girls had been playing in Manchester the night before and it seemed that all of Madrid had come over for the gig and were returning on our flight!

I’d booked the Ibis at Madrid Airport just as a stopover hotel and to be near the airport for our flight to Peru. The hotel is about an hour on the metro from the centre of Madrid, but it’s an easy journey. We arrived at about 2030 so just had dinner in the hotel on the first night and went in to Madrid the next day.

We spent hours walking the streets of Madrid. I’d never been before so started off at Gran Via which is the main shopping street. Who doesn’t love H&M and Primark? 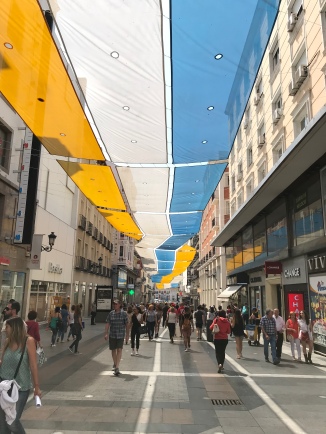 The highlight though has to be Mercado San Miguel, an indoor food market for tapas of all kinds. The 3 of us went crazy sampling and buying goodies from some of the stalls. Olives! Cheese! Cake! Cocktails! 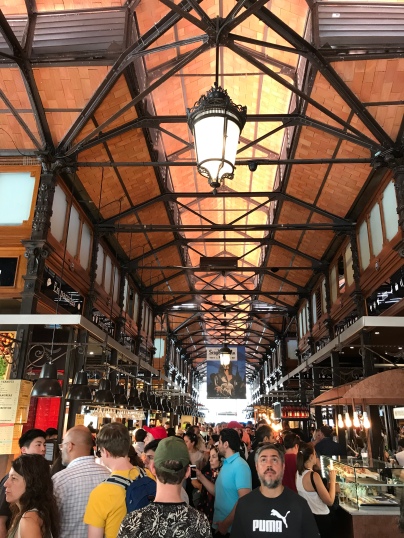 After stuffing our faces, we walked in 30 degree heat and lost our bodyweight in sweat!

We thought the Botanical Gardens would be a nice place to sit and chill for a bit but they were rubbish and not worth even the €6 entry fee. The whole place was dry, arid, and nothing was in flower, everything looked dead. I know this is Madrid in the height of summer, but they could at least water the plants!

We had dinner at Tony Roma’s on Gran Via which is an American style burger joint serving amazing burgers! It was only about 1700 and far too early for Madridians to eat so the place was pretty quiet. After dinner, we retired back to the Ibis for a few sangrias (we are in Spain!) and to get ready for tomorrow’s mammoth flight to Peru!

In the morning, we just missed one of the hotel’s free shuttles to the airport and rather than hanging around another 30 minutes or paying €20 again for a taxi, we jumped in an Uber which was only €10 and took about 6 minutes!

Although getting to the airport was quick, it took nearly an hour to get checked in! Ok, there were 9 people in front of me, but an hour?! Come on! There was only 1 check in desk for Premium Economy, although mum & the other half checked in much quicker at the Business Class desk. Annoyingly, it took less than 1 minute once I got to front of the queue. What were the people in front of me doing?! As I was still “slumming it” in Premium, I asked about upgrading to Business – €3000! I didn’t take up the offer! Madrid Airport is huge and it took a good 5 minutes on the shuttle train to get to Terminal 4s. We spent a bit of time in the Neptuno Lounge using our Priority Pass, which was very busy and had a queue when we left! The lounge is fairly big and has great runway views. There was a decent selection of breakfast and lunch items with a well stocked, self service bar as well as soft drinks. 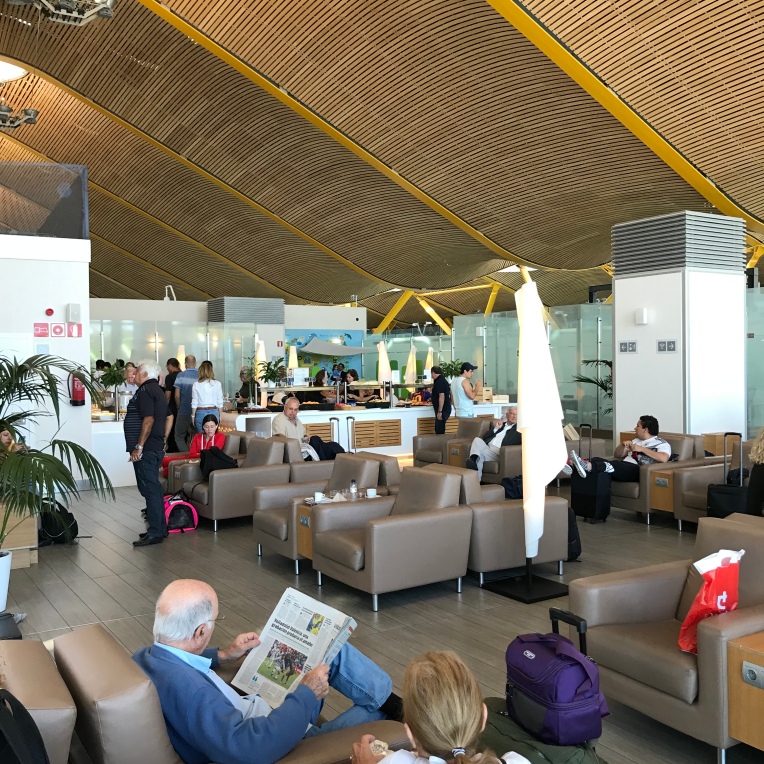 A 5 minute walk got us from the lounge to gate 25. Boarding was 15 minutes late when BOOM! a text pops up on my phone. BANG! an email! I stared at my phone in disbelief and started to shake. I couldn’t believe that this was happening to me again! I thought Orlando would be a one off, but obviously not!

After getting my new boarding pass, we stood on the boiling hot airbridge for nearly 10

minutes before being allowed on the plane. Iberia obviously can’t do anything on time. The purser showed me how to use entertainment system and features of the seat and explained about the 1 hour of free Wi-Fi, which didn’t work at all during the 12 hour flight.

The seat is spacious and comfortable but not as classy as Qatar Airways. A couple of fairly modern films such as Bohemian Rhapsody and Extremely Wicked, Shockingly Evil and Vile as well as some classics such as Mary Poppins, Taken and Marigold Hotel. All of the entertainment was watchable before take off.

Amenities kits were on the seat when we boarded and Spanish newspapers were handed out. None in English. We didn’t get welcome drinks for nearly 40 minutes and even then it was a tiny serving of cava, served the very second we started push back. There was also the choice of water or orange juice.

Menus for lunch were handed out but there was only beef left for me. I wanted the beef anyway, so whatever. We took off 26 minutes late. 30 minutes after take-off, the crew came around with hot towels. I was offered olives or nuts and given a glass of water but had to ask for wine as they started serving passengers behind me. The wine was Altos Blanco which was nice and smooth but its not an expensive wine by any means. The olives were tasty, I do love olives.

I didn’t have the gazpacho, I’m not a fan and it made me laugh that the cheese came with A grape! It reminded me of a story about American Airlines taking 1 olive out of each salad to save $40,000 a year! The mango and tomato salad came without any tomato. I wonder how much Iberia saved there? There was bread, but no butter. Kerching! €€€

The quince jelly was really nice though, I’d not had it before. I was bypassed by the wine again. It might be paranoia but I often felt like other passengers were being better served than me. Maybe the crew weren’t happy that I’d been upgraded. I didn’t belong there!

The main course beef was chewy and cheap tasting, rumpy. It was hot though and 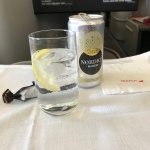 anyone who knows me knows I like my food hot. I wasn’t given a choice of dessert but I wanted the chocolate and cherry cake anyway. I was offered dessert wine which was like drinking syrup, very sweet and very lovely! Service finished after about 2 hours with a dark praline Guylian chocolate and a vodka tonic so strong it stings your mouth.

3 hours in and the window blinds are closed by the crew and the lights are dimmed. Is this really necessary on a day time flight?

Man, 12 hour flights are long! I watched The Favourite whilst eating (weird film, not quite sure about all the Oscars), watched The Mule (excellent) and paused it for an hour half way through for a nap. Then I watched Extremely Wicked (I still can’t believe he got away with everything he did!) but still had 4 hours left! Although the flight map showed the same position as before I watched Extremely Wicked with us just hovering over the Port of Spain! 4000 miles in either direction, which didn’t inspire confidence! At one point, mum looked at her watch and said to the other half, “only an hour to go”. He said, “no, 6!”. She’d looked at her watch wrong! After all this time, the noise cancelling headphones are really starting to pinch my ears. #firstworldproblems.

90 minutes before landing, lights on, warm (not hot!) towel. No fading of the lights, just FLASH! its daytime! The Spanish omelette was ok, very chorizoey and a little heavy by the second slice. I expected it to be hot but it wasn’t. The food wasn’t good enough to distract me from my sore ears.

As we were coming in to land in Lima, at an altitude of 18500ft, the mountains looked close enough to touch! The cloud looks just like coast line! It was an incredible view! It reminded me of being able to see Mount Everest from the plane when we flew to Japan. 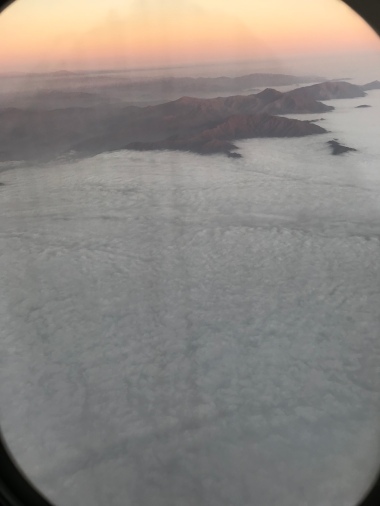 Overall, it was an ok flight. The service was functional, not at all smiley or pleasant. The food was mediocre and not anywhere near as good as Qatar or Virgin. I don’t have much room to moan, considering I didn’t pay for it but I guess this was Iberia’s way of making up for the nightmare leading up to this trip.

Lima Airport was actually quite well organised, unlike Madrid, and we were through security really quickly, even with taking photographs and finger prints. The bags, however, took forever to appear and I was getting nervous with packs of sniffer dogs lurking about and occasionally barking!

Points earned: 3143 Virgin Flying Club points for paying for everything on my Virgin Atlantic credit card. 273 Avios points for the Manchester to Madrid flight.