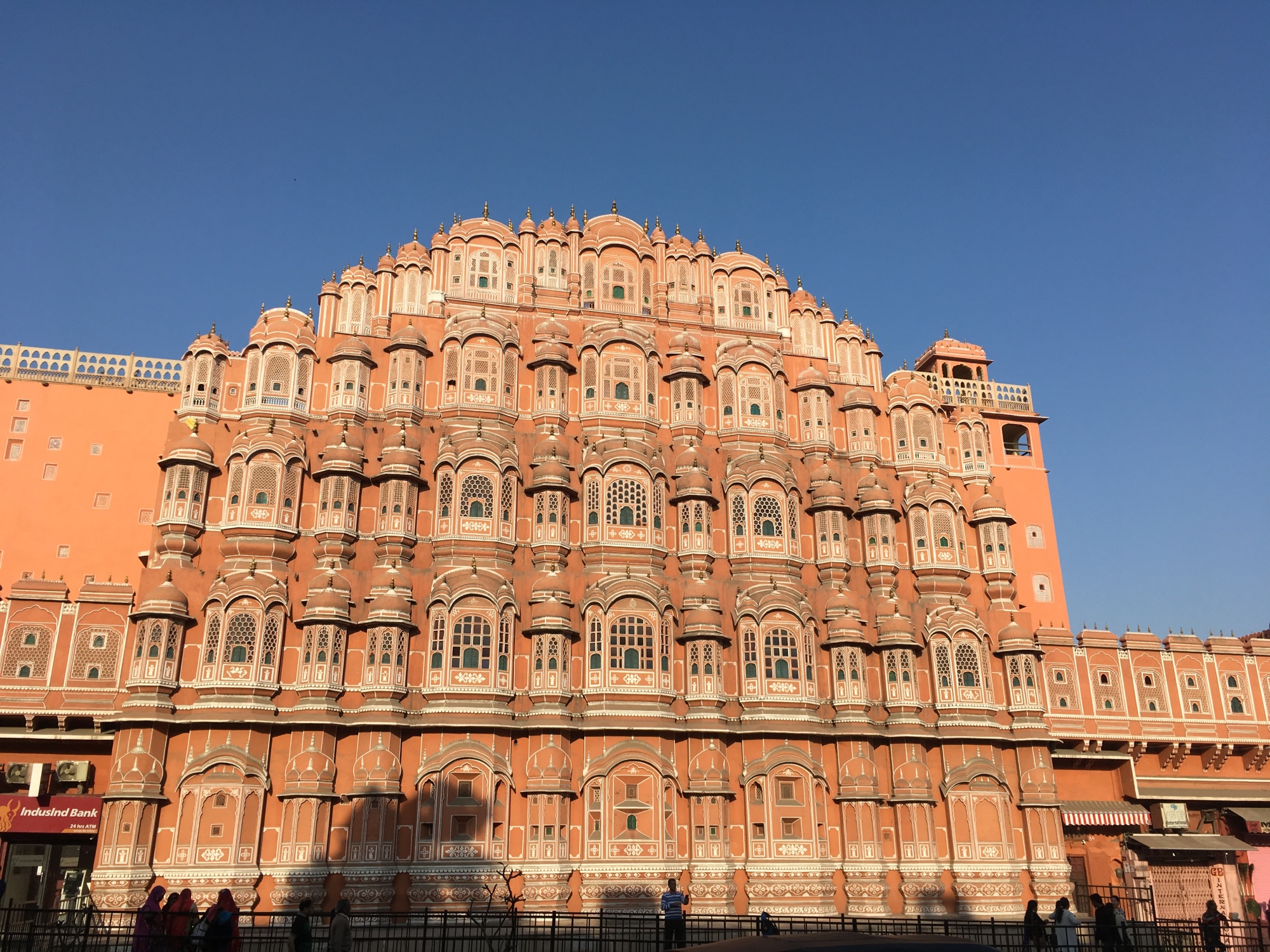 Driving from Agra to Jaipur and once again you notice that India is actually very beautiful outside it’s filthy cities. We passed a garage selling mopeds from 46,000 rupees (about £500) which probably accounts for them being everywhere! I’d seen videos online of whole families on bikes, but the most people I saw was 4, although they did have a suitcase with them!

Driving in India takes nerves of steel, but despite the constant honking of horns, no one seems angry. There’s no angry shaking of fists or rude hand gestures, just BEEP BEEP BEEP. All the live long day! I don’t think I noticed anyone checking their mirrors before pulling in to traffic, not least the 9 cars driving down the wrong side of the road! We stopped off at a motorway service area and bought some Pringles and Cadbury’s chocolate bars – £8.00! But we were sticking to factory made food; still no sign of Delhi Belly!

About 1 hour out of Agra, we stopped off at Fatephur Sikri, yet another red sandstone fort, this time built by the 3rd emperor or India, Akbar. The city fort was built by 20,000 people and 12 years to finish. The building was interesting for its mix of Hindu and Islamic architecture, owing to Akbar’s 3 wives of different religions – Muslim, Hindu and Christian. Each wife had their own quarters and each had the same budget to spend on creating their space. The smallest room belonged to the Muslim wife, the bigger room was the Christian wife’s and the largest was the Hindu wife’s. Although they all had the same budget, the women spent the money on different things, some choosing décor and art with precious stones over space. 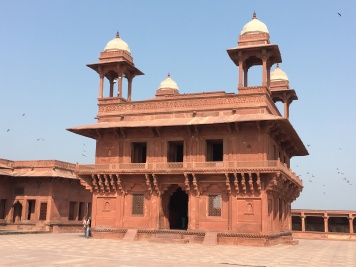 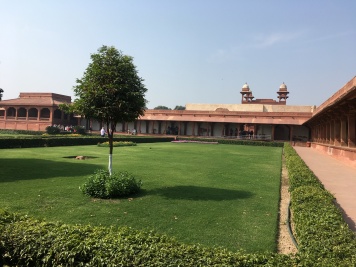 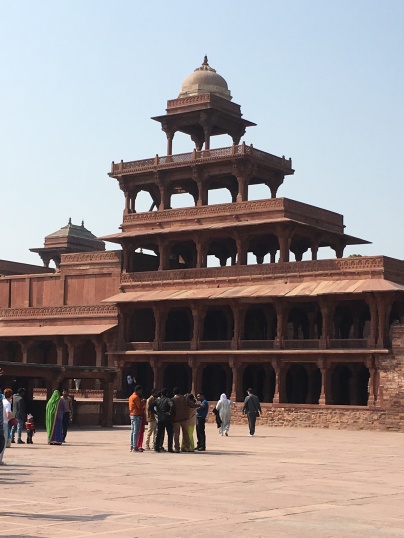 The complex at Fatephur Sikri has some really gorgeous buildings but the experience is ruined by constant hawking and pressure to buy things, there’s not a moments peace. In most places, once you’d paid your money and entered the site, you were free of hassle but that wasn’t the case here, it was pretty much constant. It’s very apparent how little money people have, but you can’t buy something from all of them, its really hard. 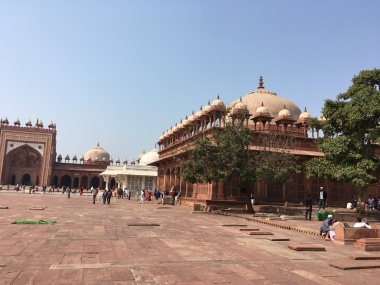 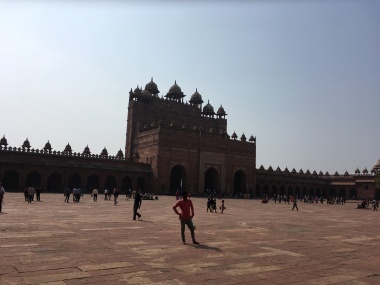 We continued our journey to Jaipur and checked in to hotel number 3 of the trip, The HR Palace. Rivalling Delhi in terms of noise, our room is on the ground floor, right next to reception and next to the noisy road. The room is nice with high ceilings and a modern bathroom, but with an alleyway running next to the room, we couldn’t open the curtains so had no natural light and all of the fabrics in the room were grey, like dust and pollution had permeated in to everything.

The restaurant at the hotel was on the roof and served excellent vegetarian food (we were still avoiding meat anyway!). The hotel was completely dry so didn’t serve alcohol but that wasn’t a major issue for us.

Food prices are cheap in India, as you would expect really. What I didn’t expect was portion sizes to be so big. Me and mum were easily able to share a curry and rice with naan, which meant that we were paying around £4.00 each for an evening meal with drinks. Aside from the weird chicken in Agra, we didn’t have a bad meal anywhere and the most we paid for a meal was around £25.00, when the guide invited himself to lunch with us in Delhi.

Out of Delhi, Agra and Jaipur, Jaipur was my favourite city. It felt cleaner, safer and generally more pleasant. There was a clear local effort to clean up the streets and recycling vans constantly patrolled clearing up rubbish, screaming their message of tidiness. I loved the architecture, the old walls painted pink for Prince Albert’s visit in 1876 (hence the name, Pink City) with their 9 gates. It reminds me a little bit of York. 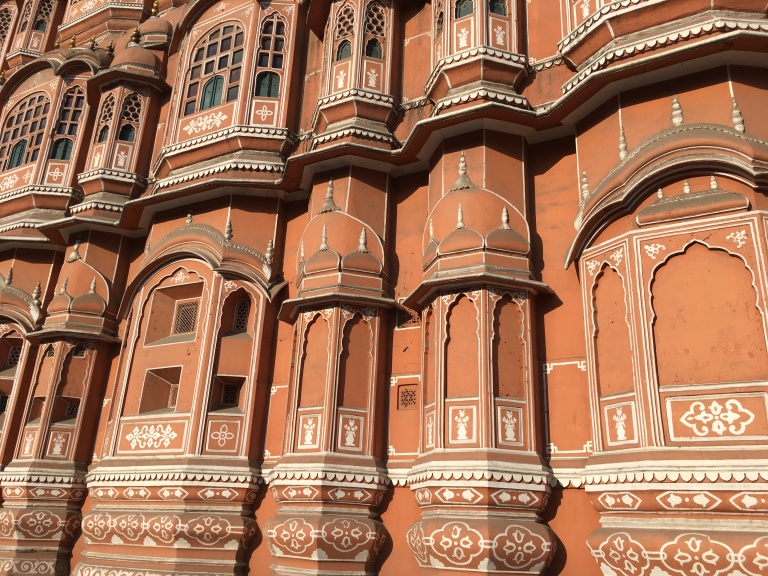 Jaipur is also the home to yet another (but my favourite) red sandstone fort – the Amber Fort. With it’s 14km perimeter wall that looks like a Mini Wall of China, I loved the courtyards and elaborately decorated rooms. Split in to 6 sections with 4 courtyards, I loved exploring the old rooms with secret corridors that the Emperor would have used to visit one of his many wives. 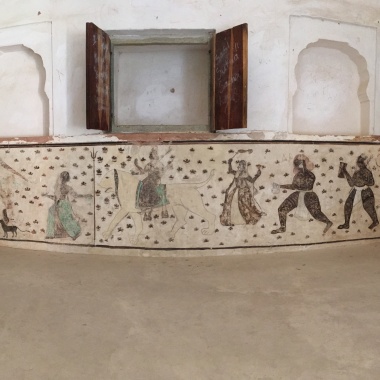 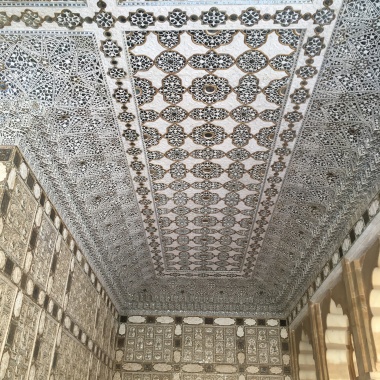 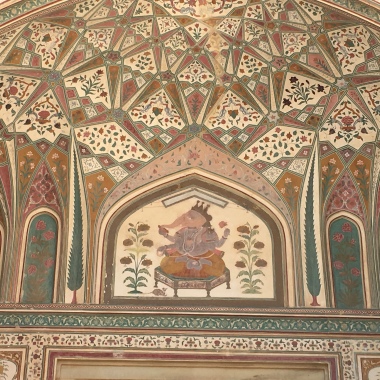 The views over the town of Amer and in to the distant hills were spectacular and we were free of hassle and the constant pressure to buy shiz. Once we were inside that it is, queuing to get in was like being at a market with people trying to sell us pens, bags and wooden elephants.

I reluctantly did the elephant ride up to the fort which I wasn’t keen on doing, but mum wanted to. The elephants appeared well looked after and our guide told us that they only work from 0830-1130 every day. We left the fort at around 1130 and passed a line of elephants returning home after a morning’s work. 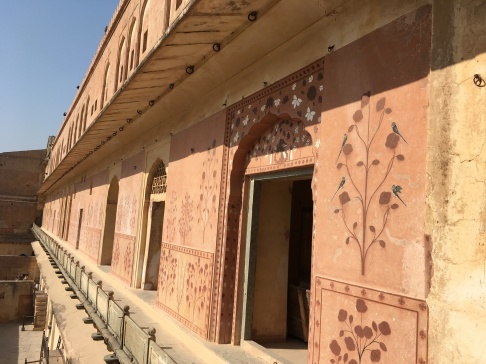 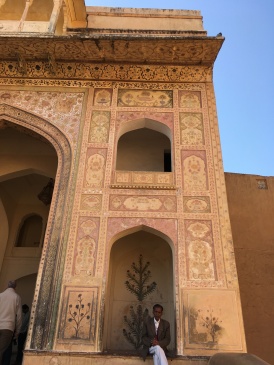 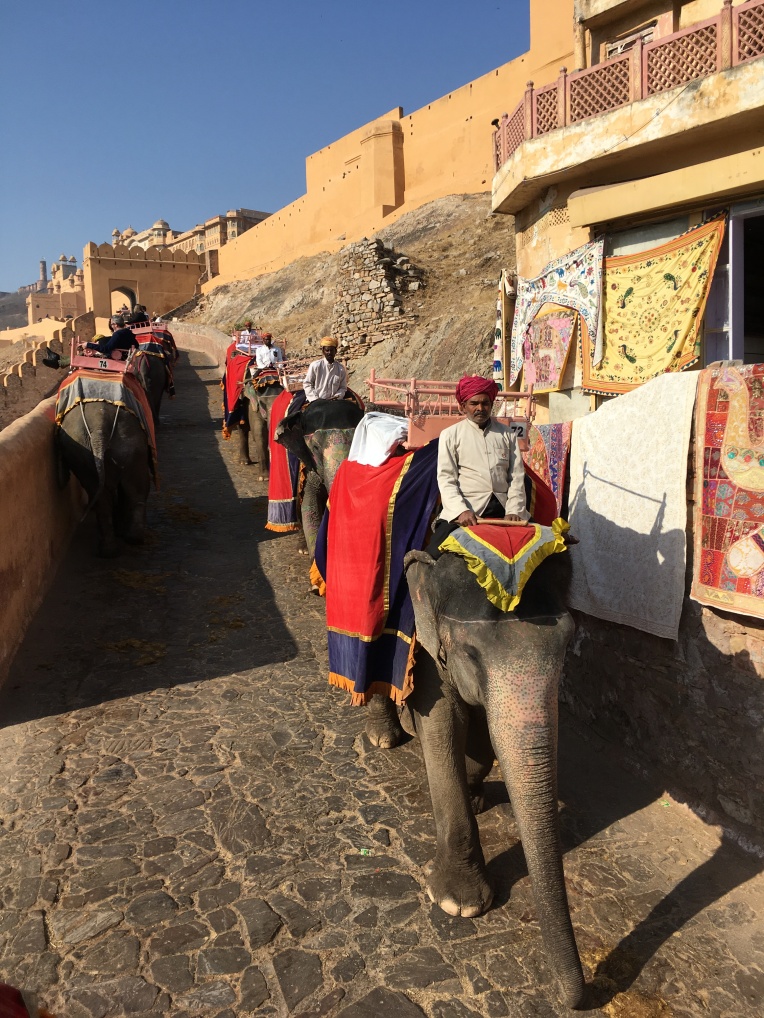 After a brief photo stop at the Water Palace, we were dragged to a jewellery shop. After 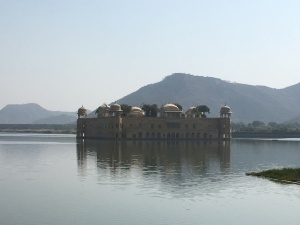 being inside for about 5 minutes, feigning interest in their wares, I started to move towards the door. A guy told us that we couldn’t go out the way we came in and started to lead us to another back room. I’d had enough by this point, having been locked in back rooms in Delhi and Agra and refused saying we’d go back out the way we came. There was a big NO EXIT sign on the door and mum said, “we can’t go out that way” but I just said yes, we can, and we are and walked out of the shop.

Our guide looked a little annoyed that we’d left the shop so early and attempted to get us in to the art gallery across the road, but we just opened the car doors and got in. When will they learn that these are not the experiences that tourists are looking for?

I was rather annoyed when mum later said, “I quite liked some of those earnings, they were only £20”.

After the debacle in the jewellery shop, we headed off to the Jantar Mantar Observatory, a collection of astronomical instruments from the 18th Century. The science was a bit much for me and mum, but it was pretty cool to see the world’s biggest stone sundial! 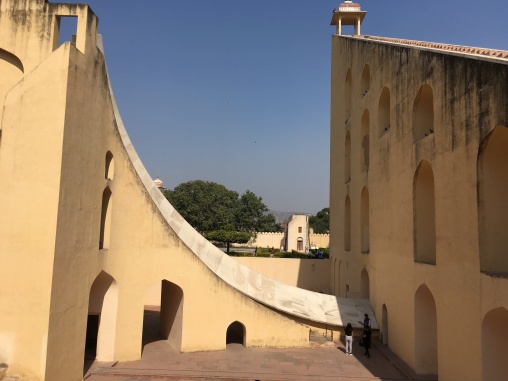 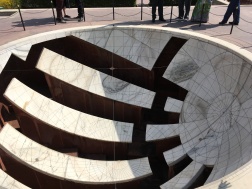 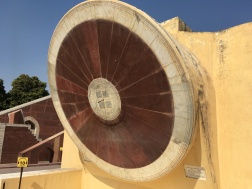 We then walked the short distance to the City Palace which houses artefacts belonging to the Rajasthani royal family and is the current king’s residence. To be honest, it wasn’t very interesting. A lot of old clothing and armour which got a bit repetitive after you’d seen 10 dresses and 100 guns. 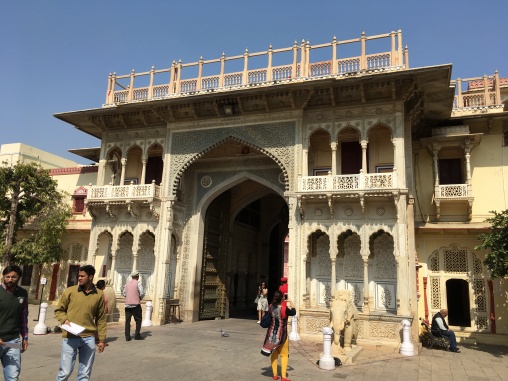 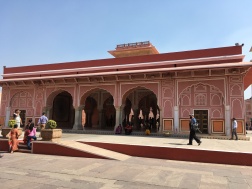 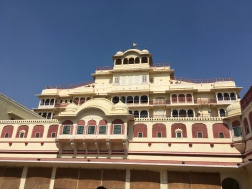 The next day was our longest road trip yet, taking us back north towards Delhi but stopping short of the capital in Cyber City, otherwise known as Gurugram or Gurgaon. Taking some 6 hours, I imagined long, boring highways like when we first left Delhi for Agra, but the journey was quite interesting as passed little towns and villages built along the road.

There was no cultural significance to staying in Gurgaon. I just wanted us to stay in a luxury hotel for a few nights after the tour to relax by a pool, read books and, hopefully, get a bit of a tan. Unfortunately, the weather didn’t play ball and we didn’t get much sunbathing done but it was relaxing nonetheless.

There’s a plethora of luxury hotels in this area due to the number of large offices specialising in outsourcing (so when you call your phone company or insurance provider and get an Indian call centre, it could well be located in Gurgaon). We settled for the Crowne Plaza Gurgaon in a Club room and it was exactly what we needed. We had a great view of the pool and the room had remote control curtains – another travel first!

Because we’d booked a Club room, we got access to the Club Lounge which was a great place to sit during the day and night. The lounge served breakfast, coffee and pastries during the day and evening canapes with a free bar from 1800 until 2000. The hotel was ludicrously expensive for food and drink, but the £20.00 per person per night supplement for the Club Lounge was great value for money. Everywhere in India, wine was expensive and especially here at about £7.00 per glass. I easily drank £20.00 worth of wine a night! 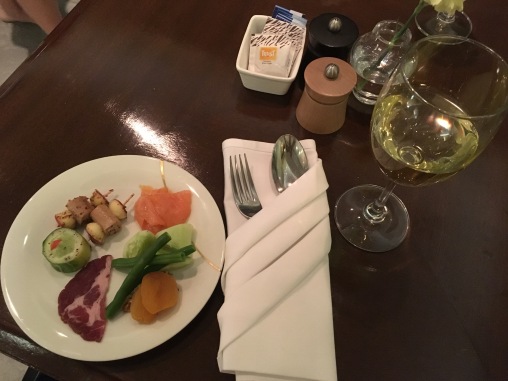 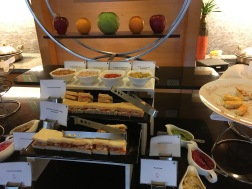 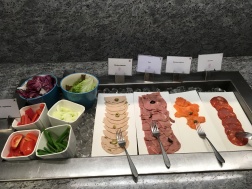 The evening canapes were great too. We actually found that we could buy lunch in the restaurant and then just eat the canapes on an evening and not bother with dinner in the restaurant, adding even more value to the £20 supplement! I think hotel lounges are my new favourite thing in travel!

Having a few days at the end of the tour was great and gave us time to reflect on India and, honestly, it didn’t do it for me. Some things I’d been told about India didn’t come true; I didn’t get Delhi Belly (my advice, stay away from meat!), I didn’t see anyone poo in the street (although public toilets are everywhere, are actually in a good condition and are very cheap to use) and it didn’t smell (I can imagine it does smell once the temperatures increase).

Every hotel had a security guard and the Crowne Plaza Gurgaon had airport security where bags were scanned and you were frisked when entering the hotel. Taxis had to pop their hood and have their boot inspected before entering the grounds. I guess after the Mumbai hotel bombing in 2008, security had to be stepped up.

If I was to go back to India, I think I’d do a group tour rather than private; safety in numbers. I am glad that we stayed in mostly 3 and 4-star Indian hotels as it gave us a view of the real India. Staying in 5-star hotels, like the Crowne Plaza, cocooned us from what India is really like. I might not have enjoyed India that much, but I at least feel like I experienced it as it really is.

Price paid: £500.00pp for 10 nights private tour with driver and local guides in each city but excluding monument entrance fees which added about £50.00pp extra. Tour booked through Travel Fair India Ltd, based in Delhi on B&B basis with dinner included in Delhi and the Club room upgrade in Gurgaon.