Usually for me, travel is about exploring new cultures and countries and I often overlook the delights on my doorstep.

As part of my IHG Accelerate promotion for this quarter, I needed to stay in 2 different Crowne Plazas. The plan was to go to Leeds for the bank holiday, but a last-minute change of plan saw us going to Harrogate. Considering that Harrogate is less than an hour’s drive from home, it’s amazing that I’d never been!

As it was bank holiday Monday and the Crowne Plaza is a business hotel, attached to Harrogate Convention Centre, the room rate was pretty cheap. One of my Accelerate targets was to book an IHG Bonus Points rate so that’s what I booked for this stay, hitting that as well as the stay once target and the bonus target for a stay in May. As I booked the stay via the app, I was 50% of the way towards that bonus too.

We arrived at the hotel around midday and although I’d selected early check-in via the IHG app, I didn’t expect a room to be available that early. As luck would have it, they did have a double room on a high floor (another preference I’d stated on the app) that we could check-in to. We weren’t given the upgrade I’d requested on the back of their email a few days earlier, so I asked about Club Lounge access and was charged just £20 for the upgrade. I was also offered a free drink or 400 points as an IHG Rewards Gold member. I chose the points.

We went to our room on the 11th floor, which had fantastic views of the Yorkshire countryside. The hotel has (in the past year or so) been refurbished from a Holiday Inn to Crowne Plaza and the room and bathroom were still in decent shape. The super king size bed was ridiculously big and very comfortable. I loved the quirky wallpaper.

After a brief stop in the Club Lounge for a lemonade (£4 of our £20 upgrade charge made back!) we headed off into Harrogate town centre, just a five-minute walk down the road.

Harrogate is a lovely little town to wander around for a few hours. We indulged in some retail therapy and I got 2 pairs of shorts and a t-shirt in the sale in Gap which were a total bargain. I’ve put them aside for the next Orlando trip coming in October! Harrogate is fairly affluent and I loved looking in the expensive home decor and furniture shops. I got loads of ideas which I know I’ll be able to emulate for a lot less than the high prices they were charging! We walked down to Montpellier Gardens where you can join a free walking tour of the town before heading off for lunch.

We had a gift voucher for The Ivy and had a reservation for afternoon tea, served between 1500 & 1700. Outlets of the famous London Ivy have sprung up all around the country and I was looking forward to trying their food and feeling posh for an afternoon.

The restaurant is very nicely decorated and they have a gorgeous courtyard garden. The restaurant wasn’t very busy. In fact, the whole town was quite subdued considering it was a hot, sunny bank holiday Monday. Despite it being quiet, service was quite slow and it seemed to take ages for the sandwiches and cakes to come out. Some parts of our order didn’t arrive at all.

The truffle chicken sandwich in the brioche bun was lovely, but the gluten free rye bread topped with smoked salmon was very dry and crumbled as soon you tried to pick it up. I thought the sandwich selection was a bit stingy. 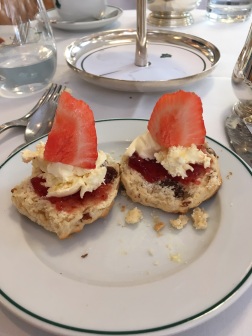 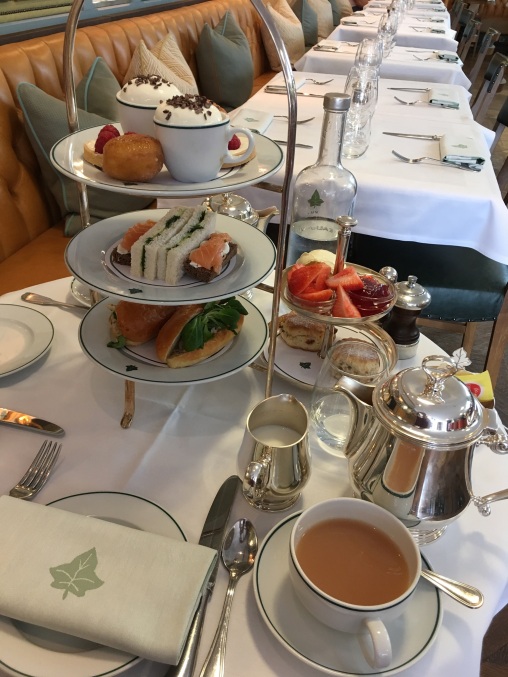 The cakes were better. The mini donuts were filled with a cream brûlée but it just tasted like normal custard. The espresso cup filled with salted caramel chocolate mousse was delightful and probably the best thing on the plate. I actually consider myself a hardened scone addict and these tiny efforts weren’t that great. Too small and too dry. The tea was also disappointing and didn’t get any stronger despite being left to stew. I can’t stand weak tea!

After tea, we took a slow walk back to the hotel to freshen up for the evening. Drinks and canapés are served in the Club Lounge between 1700 & 2000 and we headed down about 1830. The canapé selection was pretty pathetic with a few glasses of olives and popcorn, some salmon bites and breaded mushrooms with a blue cheese dip. They were only refreshed once in the 90 minutes we were in the lounge. 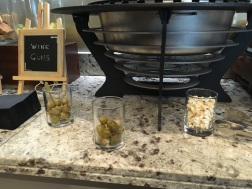 They did, however, keep the wine stocked up so we made sure to get a few large glasses down us to get value out of the upgrade charge! I would have liked a wider choice of drinks; there was just wine (red and white), beer and a limited choice of soft drinks. No spirits and not anywhere near the selection offered at the Crowne Plaza in Delhi or the Park Plaza in London.

Although the dinner menu for the hotel restaurant looked decent and was priced well (and it takes Tastecard 7 days a week), we decided to try a Thai restaurant we’d passed earlier in the day.

We had to wait a short while to be seated at Sukhotahi but we weren’t in a rush so didn’t mind. The wait gave us time to peruse the menu and I went with pork and prawn dumplings for starter whereas the other half went with his usual of chicken satay. Despite eating it nearly every day on our trip to Thailand, he’s still not sick of it! 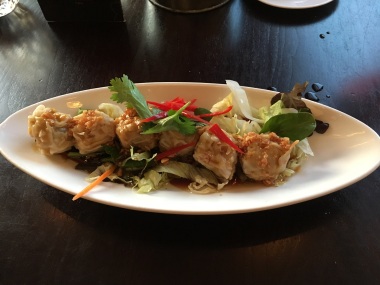 For our mains, the other half went with another favourite of beef massamam with jasmine rice and I ventured a pork curry with garlic, peppers and onions in a sweet soy sauce with fried rice. The presentation was spot on but the damn cold I’ve had for the past 3 weeks was determined to not let any of the flavour through. That was pretty annoying! The other half really enjoyed his meal though. 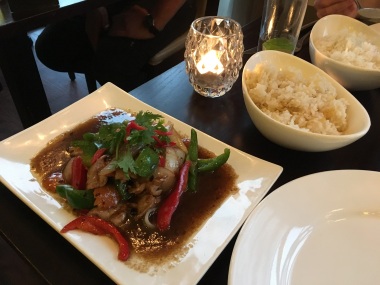 For dessert, another firm favourite of mango sticky rice for the other half, but none have matched the one we made during the cooking class in Thailand. I went with coconut ice cream which I also couldn’t taste.

The following morning, we checked out the breakfast options in the Club Lounge but it was fairly basic so we opted to eat in the main restaurant which had a selection of fruit, juices and hot options. The buffet was fairly standard so I ordered poached eggs with smoked salmon from the menu which took a little while to arrive. It was tasty but not a very generous portion. The pastry selection wasn’t replenished so we went back to the Club Lounge for coffee and pastry. The cappuccino, despite being from a machine, was actually really nice. 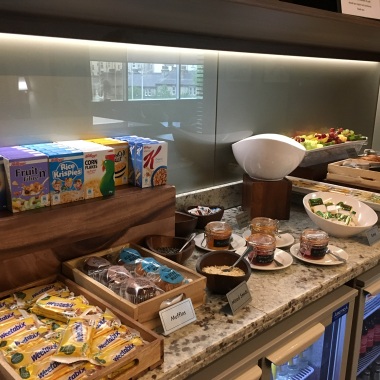 Although we’d arranged midday checkout when we arrived, we were ready to leave by around half 10 so paid up and made our way to the world’s most complicated car park.

Driving to the exit of the car park, a massive sign shouts STOP, park here and return to reception if you haven’t validated your parking ticket to exit. We hadn’t validated a ticket; we didn’t have a ticket! So we parked the car and I returned to reception only to be told that we didn’t need a ticket, the barrier would read the car registration (entered in to the system on the reception desk when we checked in) and open automatically. In the end, there wasn’t even a barrier, we just drove straight out of the car park! They really need to do something about that sign!

Points earned: 1300 IHG Reward points for the room plus 400 Gold Member welcome bonus totalling 1700. In addition, 3000 Accelerate points and 350 for paying for the stay on my IHG Reward Credit card.