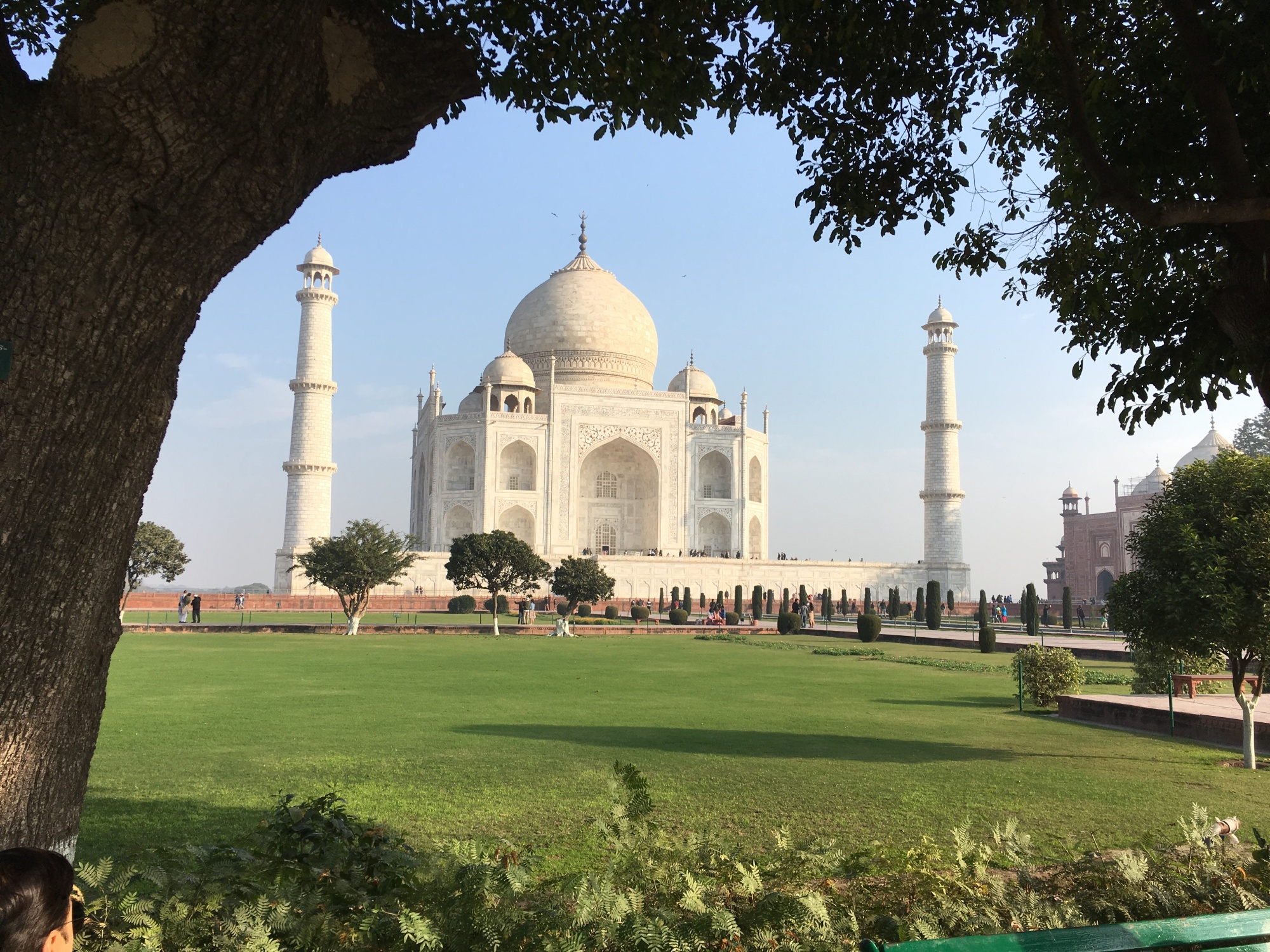 The drive was mostly pleasant, the roads weren’t too busy especially once we got on to the highways. Our driver was safe and had the reflexes of a cat, which I was grateful for! We stopped on route for a comfort break and bought some souvenirs. The drive was a little boring, but it was nice to get out of the city and see some of the countryside. It reminded me a lot of England, green fields and farmland. Poverty must be so much easier in the countryside, where you can grow your own food and breathe clean(er) air. Poverty in the city looked much harder.

I think the driver was a bit tired, so I made sure to keep my eye on him and kept catching his eye in the rear-view mirror. Those long, straight roads were a bit dull to drive on, but it was nice to not to have constant honking. Until we reached Agra at least!

For a city of 4 million, it feels provincial next to Delhi! A lot more dogs, cows, goats and monkeys roaming around the streets and there’s still poverty everywhere. We saw a guy all crumpled in the street who I think was probably on drugs (after what we’d seen in Delhi), but mum insisted he was dead. The way he was contorted would certainly have been uncomfortable. Almost as uncomfortable as watching people just step over him as if he wasn’t there at all.

We got the hotel, Howard Plaza The Fern, around lunchtime and decided on a little rest before heading out for an afternoon tour to the Tomb of Itimad-ud-Daulah, known as the “Baby Taj”. Built in 1639 by the grandparents of Mumtaz Mahal, who the Taj Mahal was built for, was another red sandstone and white marble structure. Those Mughal’s really loved their red sandstone and white marble architecture! 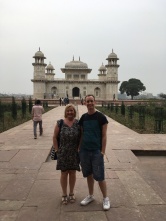 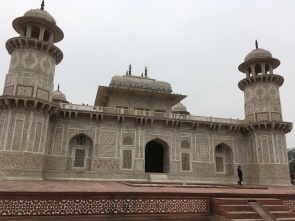 Being mid-afternoon, the tomb was nice and quiet so we were able to walk around with our guide and enjoy the building and gardens. I was asked for a selfie with a child which bemused mum again!

On our way back to the hotel, we made a stop at the Agra Red Fort. A walled city, built from – wait for it – red sandstone, which took over 100 years to finish and was the main residence of the Mughal dynasty until the late 1500s. Surround by a moat which would have been filled with natural security (crocs and tigers!), you could probably spend a full day exploring the 94-acre site. These are the kinds of old buildings that I really enjoy visiting, with old rooms, courtyards and gardens alive with history. The windows and balconies offered some great views of the Taj Mahal.

Of course, this is India, so after we’d seen some things that we were actually meant to see, we were taken to a random carpet shop. Does anyone actually buy anything from these places? There was no hard sell but it got very awkward with just me and mum being led in to a back room with 5 men and the door closed behind us.

After escaping from the carpet shop, we returned to our hotel and were able to enjoy a sundowner on the rooftop bar which had a great view of the Taj Mahal in the distance with not a single crackhead in sight. You could definitely tell the difference in quality in this hotel versus Delhi, although me & mum caused a bit of a stir in the restaurant when we said that service at dinner was a little slow. Indians take great pride in service delivery and they were very apologetic for our wait for dinner, wheeling out the Head Chef and General Manager to personally apologise!

We were up early the next day for the highlight of the trip – the Taj Mahal! The hotel was just a 5-minute drive from the Taj, which we arrived at just after 0800. It’s apparently advisable to go early to avoid the crowds and day trippers who usually arrive from 1000. The original plan was to be there for sunrise, which would have been spectacular but with a cloudy forecast, it wouldn’t have made sense to get up even earlier.

Built by Mughal Emperor Shah Jahan in memory of his wife Mumtaz, the 42-acre site took some 22 years to build and cost a staggering 40 million rupees. That was a significant sum of money in the 1500s and equates to around £585 million in today’s money!

The building really needs no introduction, it was the sole reason for our trip to India after mum compiled her Bucket List and it really is beautiful. Mercifully, no red sandstone in sight! The building shimmers in the sun and I’m glad we made the effort to get there early as it wasn’t too busy. Again, I’m asked for a selfie with a group of lads! I should have offered an autograph!

We were harassed for professional pictures so after I caved in and agreed, a photographer followed us around the site and made us do stupid poses in front of the monument. Not at all natural for me or mum, but for the sake of £20, it was worth it to get some pictures of us both together. Having said that, it was a bit of a dodgy drug deal collecting the pictures and CD as no commercial activity is allowed at the Taj. As we were leaving our guide disappeared wit our money to pick up the “goods” and returned shortly after with a package that he insisted I hide under my jacket! The pictures are actually alright and they came with an album of prints as well as the CD. Much cheaper than Atlantis in The Bahamas!

After a few hours of wandering around the grounds of the Taj and exploring the building’s inner chambers, we made our way to the exit thinking that we would be taken back to the hotel for a day of relaxing on the rooftop bar. Not quite! Despite being told that we weren’t being taken to another shop, we were dumped at a random marble shop and given a brief demonstration on how they inlay semiprecious stones in to the white marble used in the Taj Mahal. Fairly interesting, until again we’re led and locked in a room, just the 2 of us and 2 men. There was still no hard sell, but it was getting a bit endless. We weren’t in the market for buying a marble dining table. No, we didn’t want it shipping to the UK. No, we don’t want to buy a marble elephant.

We manage to cause another kafuffle at dinner by leaving some gristly chicken on the side of our plates. After the long wait for dinner the night before, we’d decided to go for the buffet, which was ok but the chicken was a bit weird. So out comes the chef again (a different one to last night) to offer to cook us chicken to our liking and along comes the General Manager to offer his apologies for our disappointment. It was fine really, just not how we’re used to eating chicken. We’d mostly avoided eating meat anyway as that’s a good way to avoid Delhi Belly, so we weren’t really bothered but it seemed to cause a stir with the staff!

I bet they were glad to see the back of us the next morning when we checked out for our road trip to Jaipur, the penultimate stop of our Golden Triangle tour.

Price paid: Included as part of a tour booked through Travel Fair India.

One thought on “Travelling with Mother; Agra edition”

This is a text widget. The Text Widget allows you to add text or HTML to your sidebar. You can use a text widget to display text, links, images, HTML, or a combination of these. Edit them in the Widget section of the Customizer.
Loading Comments...
Comment
×
%d bloggers like this: