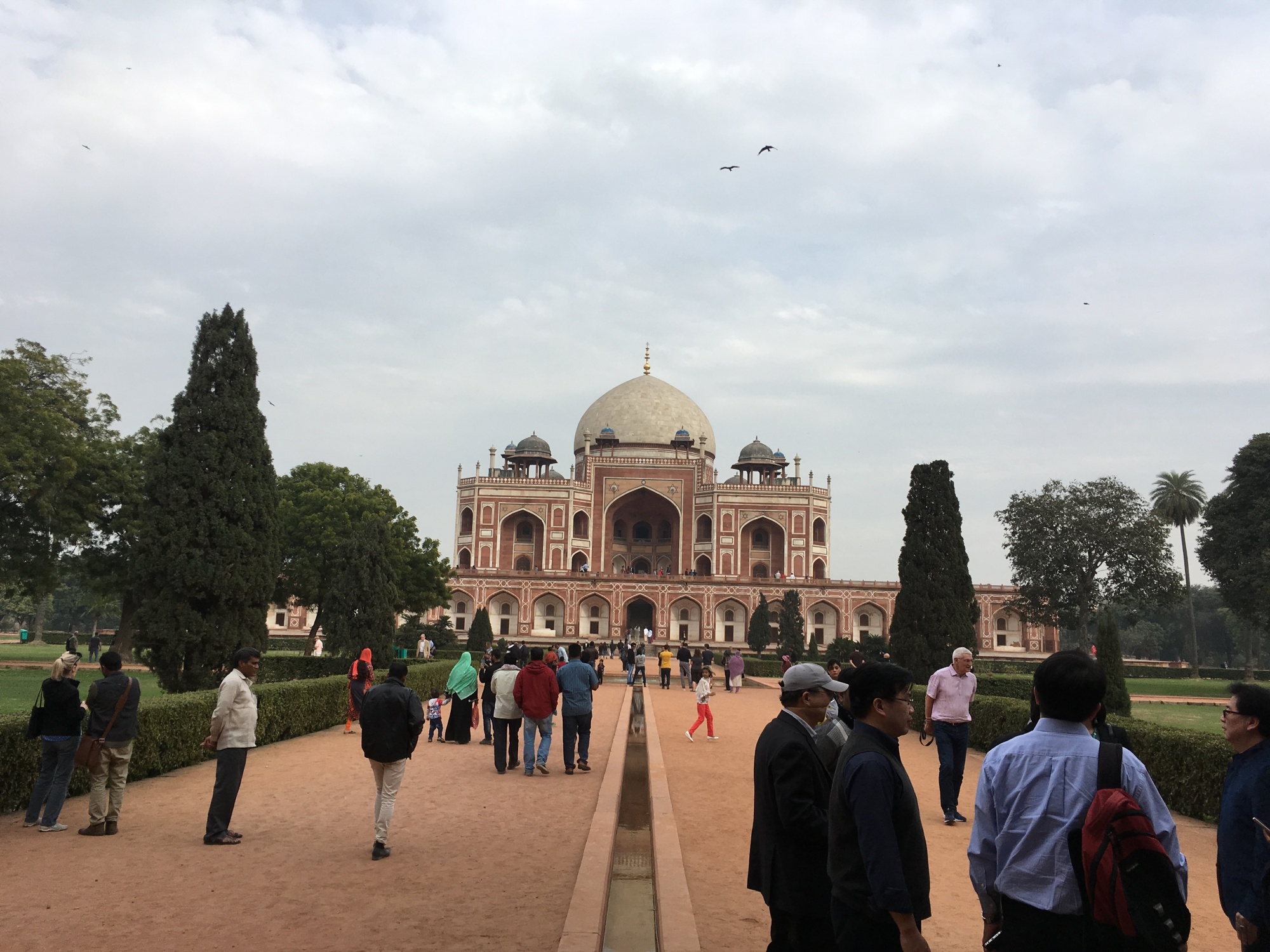 Everyone says that “nothing can prepare you for India”, so I wasn’t really sure what to expect. I’m hardly a novice traveller but I’ll admit to being a little nervous about travelling to what I know to be a very hectic country, just me and my little old mum. I have to say though, that India was, well, pretty boring!

The first thing you notice as you step out of the airport is the crazy roads, that’s certainly a theme of Indian life; the constant honking of horns! I don’t even know why they bothered to paint lines on the roads as no body drives in them. Often there were at least 4 rows of traffic in 3 lanes! Stopping at traffic lights is optional, especially for motorbikes, of which there are billions. I knew the roads were going to be like this, the state of Indian roads has been well documented on TV, but Mum thought New Yorkers beeped their horns too much, so she was in for a bit of shock!

The drive to our New Delhi hotel, the Prime Balaji Deluxe, took around 1 hour, despite it only being about 12 miles from the airport. Good old Indian traffic! The area around the hotel wasn’t great. You obviously expect poverty, but I wasn’t prepared for people smoking drugs off foil in the alleyway beneath my bedroom window. That was certainly a travel first!

The hotel itself was fine, basic, but fine, and we were only there for 2 nights. But between the drugs, dogs barking and fighting all night, the incessant beating of drums and fireworks being set off, I maybe wouldn’t rush to stay in this area of town again! I was so glad that Virgin Atlantic provide ear plugs on their night flights!

We arrived at the hotel just after lunchtime, but with the drug taking, we decided not to go for a walk and explore the local area and chose a nap instead. The plan was that our driver would pick us up at 1900 to take us to the (touristy) light & sound show at the Red Fort. This didn’t quite go according to plan as the show was in Hindi with the English version an hour later. Having travelled through the night and being quite tired, we chose to go back to the hotel for dinner and an early night. In hindsight, I bet the show would have been quite interesting in Hindi, but jetlag’s a bitch and we weren’t thinking straight. Nonetheless, we had a lovely dinner of paneer and mushroom curry with rice and cheesy garlic naan at the hotel. Probably cooked by smacked up chefs, but hey ho.

After a simple breakfast of cereal and toast, but surprisingly good coffee, our driver collected us from the hotel early the next morning and took us to the first stop on our tour of Old & New Delhi; Laxmi Narayan Temple in New Delhi. Opened in 1939 by a wealthy industrialist, it’s one of the largest Hindu temples in Delhi and a popular attraction for practicing Hindus as well as tourists. It’s a beautiful building and delightfully quiet. 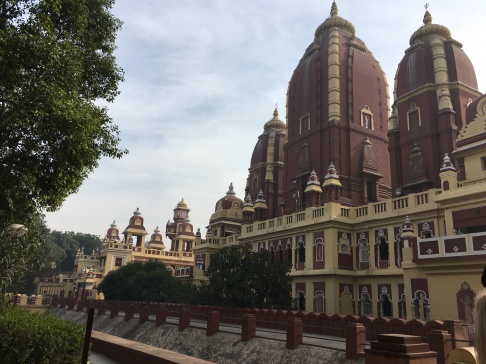 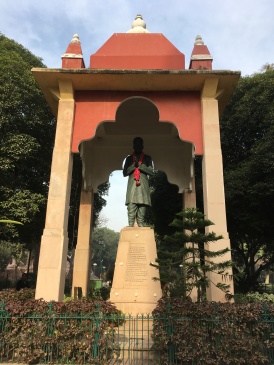 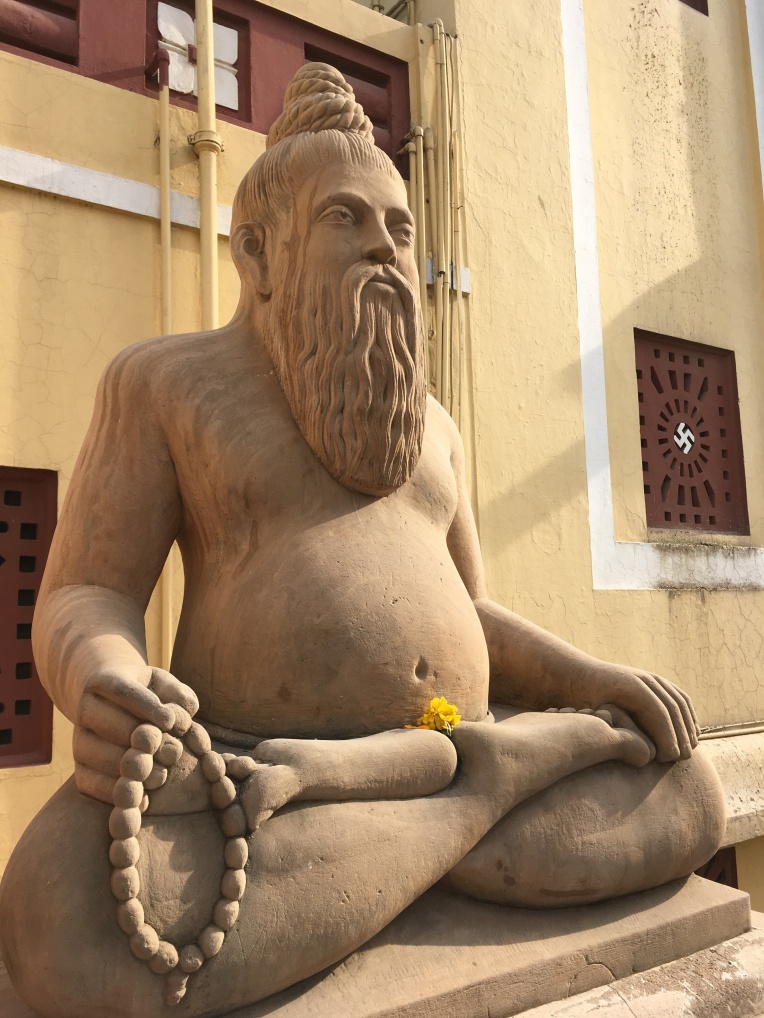 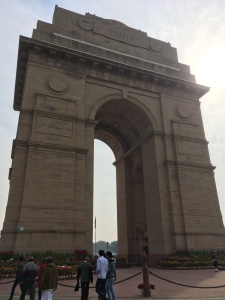 The next stop was the famous India Gate, one of the most iconic landmarks in Delhi and India. Built in 1931 to remember the 70,000 Indian soldiers that lost their lives in WW1. It was a shame that it was covered in smog and cloud, so you couldn’t enjoy its full beauty. There was a lot of visitors to the monument and it was the only place I saw a snake charmer, which I thought were a staple of Indian street entertainment! We did a drive by of Parliament House but couldn’t stop to enjoy it due to road blocks still in place from the Republic Day celebrations a week earlier.

New Delhi was built by the British in the 1900s when they decided to make Delhi the capital of British India, instead of Calcutta, and you can feel the influence everywhere. The buildings are distinctly British, very similar to London and the streets are laid out in an orderly fashion. That was the design anyway! Connaught Place particularly felt very much like London and even had British shops like Marks & Spencer and Clarkes. If I returned to Delhi, I’d maybe stay around there!

We stopped for lunch at a rather fancy (by Indian standards) restaurant clearly popular with tourists and, or rather, their guides. Close to where a number of foreign consulates are located, it attracted a certain crowd and wasn’t the cheapest place to eat. Having said that, I was grateful that we were taken there as I was a little worried about having to eat street food and the affect that might have on my stomach, especially with a long road trip to Agra coming the next day! Our guide invited himself to lunch with us which, although I didn’t have a problem with that, I wasn’t sure if that was customary or whether he was just taking the proverbial.

Skipping over to Old Delhi, you immediately notice the difference in the architecture and how the streets are laid out! Our first stop in Old Delhi was the Jama Mosque, capable of holding up to 25,000 worshippers, it was quite a feat of engineering in 1644. Built by the same emperor that built the Taj Mahal and the Red Fort, this was our first introduction to the repetitive red sandstone architecture that would become so boring by the end of the trip. 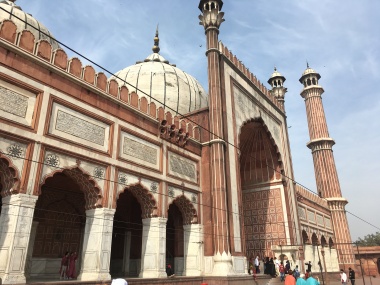 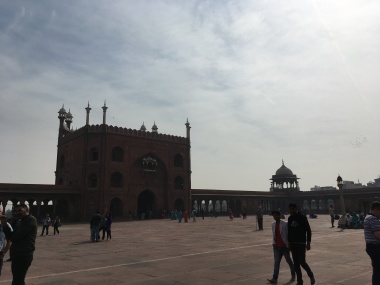 After leaving the mosque, we took a rickshaw ride to our next stop, a local spice market, which was one of the few times we felt safe walking the streets. I was a little nervous of getting on the rickshaw, but the traffic was so heavy that any bumps or accidents would have happened at 2mph so weren’t likely to be life threatening! It was actually quite an enjoyable experience and it was good to get a view of Old Delhi from somewhere other than from behind the windows of our chauffer driven car. I had massive respect for the Little guy as he peddled hard and made sure he got a decent tip at the end of the ride. 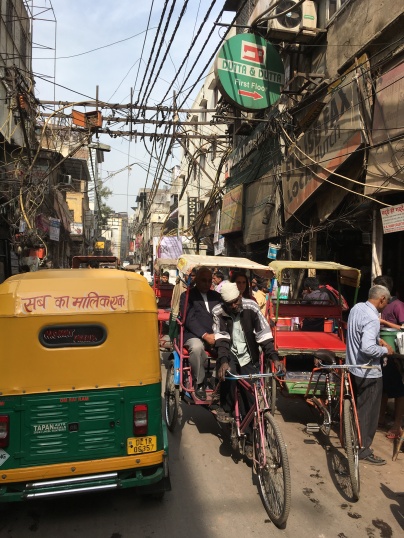 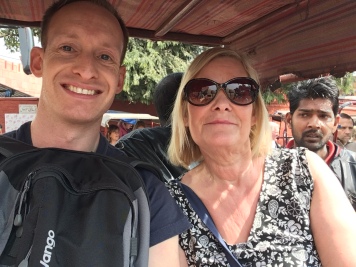 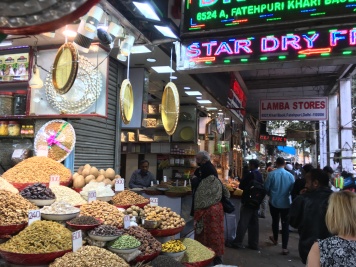 After our little shopping trip to the spice market where we bought marinades, rice and tea, we headed off again to visit Humayun’s Tomb, a 16th century structure and predecessor to the famous Taj Mahal.

There’s a few ruins on the site and well-manicured gardens. The first view of the main building as you climb the steep steps is quite impressive. Although it’s made from the red sandstone synonymous with buildings from the Mughal era, the use of white marble adds that level of difference to make this building stand apart from the others we saw on the trip. As we were leaving the Tomb, a young Indian woman asked for selfie with me which, having had the same experience in Japan, I wasn’t fazed by but mum thought it was a bit weird! 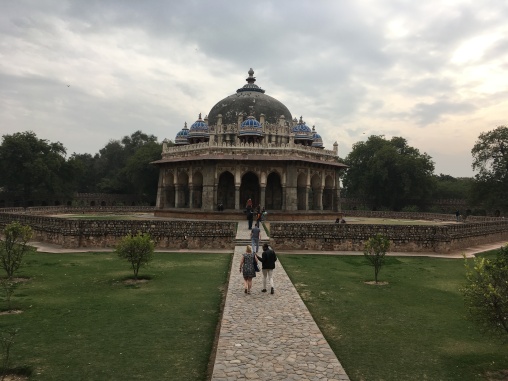 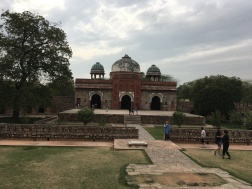 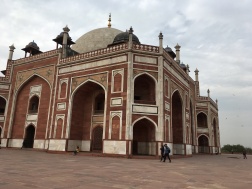 With the sun almost setting, the last stop on our whistle-stop tour of Delhi was Qutab Minar, an impressive 73-meter-tall tower built over 200 years from 1193.

The first mosque of India, the tower was constructed from the remains of 27 Hindu temples purposefully demolished to build the mosque. Unfortunately, this was the first time that we seemed to attract unwanted attention and on a couple of occasions I felt on edge as we walked the grounds followed by groups of young men. Particularly as it was starting to get dark, I was keen to get back to the safety of the car and, relative safety, of the crack den hotel. 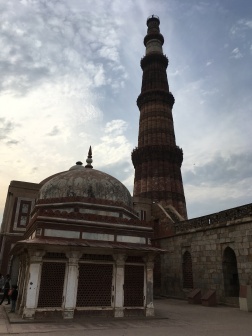 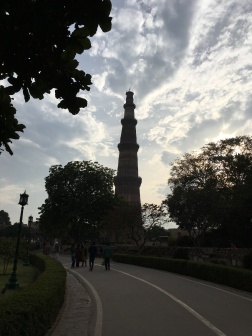 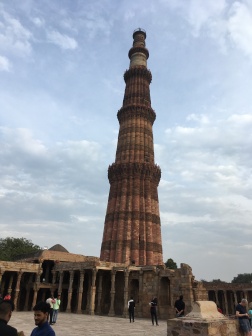 Of course, we couldn’t go back to the hotel without a stop at a carpet shop, the first of many on this trip! Fortunately, there were other tourists in there at the same time, so we just politely walked around the shop, declined the offers to buy rugs, carpets, saris and every other conceivable object and made our way for the door.

Although our stay in Delhi was brief, I’m not sure I would rush back, especially with my mum or another blonde lady. I didn’t feel especially safe, what with the drugs and the gangs of young men following us around! I was worried about the air quality and there was a constant smog in the sky but it wasn’t overpowering and not at its worst levels whilst we were there. Our tour was quite rushed, not helped by the volume of traffic so I’d recommend 2 days of exploring to anyone wanting to visit the city.

Preparing for the first of our long road trips the next day, we took the opportunity to have an early dinner and retired to our room to read and relax. Tomorrow, we’re heading off to Agra – home of the Taj Mahal!

Price paid: Included as part of a tour booked through Travel Fair India.