You might remember me booking this trip back in April, when I cashed in a hotels.com voucher and found some mega cheap seats with easyJet. Well, all these months later, the trip has been and gone!

I must admit to being pretty chuffed with myself for getting to the hotel and avoiding the nightmare junction off the M60. JetParks 1 & 2 are at the top of Thorley Lane which leads straight to Runger Lane, so if you’re using any of the hotels on Runger Lane (the 2 Premier Inns or the Holiday Inn Express), use the post code for JetParks in your satnav and then change to the hotel’s post code from there. So much easier!

The hotel & parking package was booked through Holiday Extras and included parking at JetParks 1, right at the airport and just off the motorway. JetParks 2 is slightly nearer the airport, but they’re both easily accessible with a 24-hour bus running to all 3 terminals.

T1 at Manchester managed to be one of the most disorganised airports ever, with no guidance from staff as to what they wanted passengers to do. There seemed to be a limit on the number of items in a tray through the x-ray machine, but rather than making that clear, they just shouted “too many items” at people and threw the trays back at them. When I asked what they meant by “too many items”, I was told they’re only doing their jobs. The whole area around security was filthy.

The flight was pleasant enough and we arrived right on time. We got the Alilaguna boat from the airport to the hotel, there’s a port right outside the hotel. The boat was tediously slow but actually quite leisurely. At £12.50pp each way, it’s not cheap. A return ticket was a bit cheaper but it wasn’t clear if it was a day return so we just bought 2 one ways!

We got to the hotel at 5pm and walked the short distance to St Mark’s Square. The city looks lovely all lit up and we enjoyed exploring the streets around the famous square. 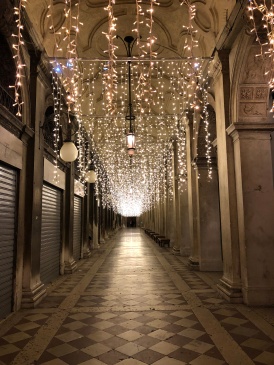 We stopped for dinner of lasagne and pizza and, of course, Aperol Spritz. We then traced our steps and stopped at a café for a ridiculous cake and hot chocolate. Typical Italian prices at £50.00 for dinner and £22 for dessert!

After a good night’s sleep, we have a basic breakfast in the hotel of cereal and juice. 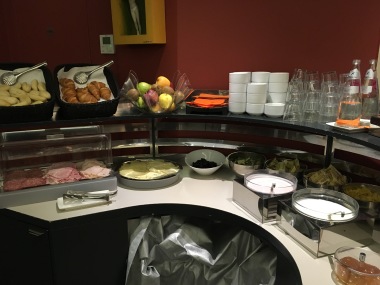 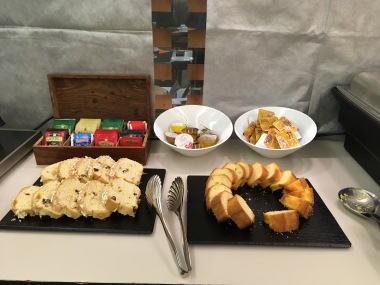 We set out at 9am and the streets are lovely and quiet. We took time to walk around St Mark’s Basilica and marvel at how on earth they built something so massive and beautiful in 1094! I spent a few moments to light a candle and say a little prayer for my grandma who died 10 years ago to the day. She was a good catholic and I think she would have appreciated the gesture, particularly as I’m not at all religious! 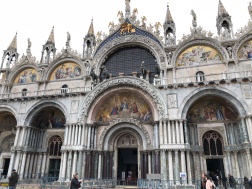 The famous bell tower opposite the basilica was closed for refurbishment which was a shame as I would have loved to have taken in the view from the top. So, bypassing the tower, off we popped to continue our exploration of the narrow streets and canals when it occurred to me that there are no roads! I mean, Venice is obviously famous for its canals, but I expected some roads and some traffic; nothing! Not in this part of the city anyway.

We walked down towards the Rialto Bridge and I accidentally bought a new jacket in the sales. Prices for clothes and souvenirs were lower than Sorrento but food was just as expensive with 2 mains, 2 desserts and 2 drinks an average of £55.00. £2.00 for a bottle of water in most places. Even the public toilets (which are dotted around everywhere and they’re really clean) was £1.50 a go!

We didn’t have a ride on a gondola, its so damn expensive! €80.00 for 40 minutes during the day and €110.00 at night is a bit steep for me. There’s only around 500 gondolas in use these days down from 10,000 a few hundred years ago. I actually saw more gondolas parked up than in use and I can’t help imagining that they’d be busier and make more money if they brought the price down a bit. Especially in winter.

Continuing our mission, we crossed over the Grand Canal, which didn’t impress me much; it’s a bit overdone with touristy restaurants and tat shops. The ATV waterbus stops also look industrial and jarring against the aging buildings. Although the streets are narrow and warren like, it’s quite hard to get lost in Venice. The main tourist sights are signposted with yellow signs on buildings and all streets seem to lead to St Mark’s Square, Rialto Bridge or the Grand Canal.

We stopped by St Maria’s Basilica because we just couldn’t get enough of the basilicas! Whilst most of the buildings in Venice are crumbling, the city feels much more looked after than Sorrento did. The streets were a lot cleaner and attempts to remove graffiti had clearly been made. A wiki describes Venice as having “elegant decay” and that’s quite true.

On the whole, we both loved Venice. It’s all about the churches and grand architecture. There’s also loads of art and museums and classical music concerts, if that’s your kind of thing. There’s obviously the Venice Carnival each February, but those masks freak me out at the best of times so Venice during the festival would be my worst nightmare!

Walking the canal side streets, you are very aware of the fragility of this city and posters protesting about the invasion of the cruise ships are everywhere. The cruises bring in a ton of money, €150 million in 2015, but you can see the impact that millions of visitors

would have in the cramped streets. Venice attracts some 30 million tourists a year, versus a population of around 55,000. This difference in numbers is glaringly obvious when you walk down streets that feel like ghost towns; locals priced out of buying homes snapped up by tourists wanting their own little piece of Venice. Of all the places I’ve been in the world, I’ve never felt anything quite like it. To keep tourism in check, UNESCO were considering putting Venice on their “at danger” list which speaks volumes about the impact of tourism here and elsewhere. And then there’s the rising sea levels.

Having said that, I’d definitely go back. And definitely in winter, when the crowds are gone and the streets aren’t packed. I think there’s something to be said for spreading tourist numbers throughout the year rather than just during the summer months. The only thing I’d do differently is stay on the other side of the island, such as near Rialto, just to save time on the airport transfer. Everything in Venice is a 10-minute walk but that boat trip from/to the airport is endless!

Price paid: £110.00pp for pre-flight hotel and parking at Manchester Airport, EasyJet flights and 2 nights at the Hotel Paganelli in Venice.

Points earned: Only 440 by paying for everything on the Virgin Atlantic Black American Express card. You can’t earn Flying Club points on hotels.com if redeeming discount codes.

3 thoughts on “A bargain winter break in Venice”